A majority of Americans hold a positive view of K-12 public school principals, who are typically seen as caring and trustworthy. How about tech executives, journalists and members of Congress? Not so much.

When comparing against other groups, poll respondents were less likely to say principals act unethically. A larger share of respondents also felt principals face “serious consequences” for unethical behavior and that they are more likely to take responsibility for mistakes. Though principals performed better than the other groups in the study, the results weren’t entirely positive. Just 5 percent of respondents said principals act unethically “none of the time,” and 19 percent said the school leaders face “serious consequences” for their behavior “all or most of the time.” Members of Congress were viewed as the least ethical — and the least likely to be held accountable for their actions.

These factors can color the public’s perception of their job performance, said report co-author Lee Rainie, director of internet and technology research at Pew Research.

“If you think unethical behavior is a relatively common thing in that group, then you don’t think other aspects of its work are nearly as likely to be well performed,” he said. 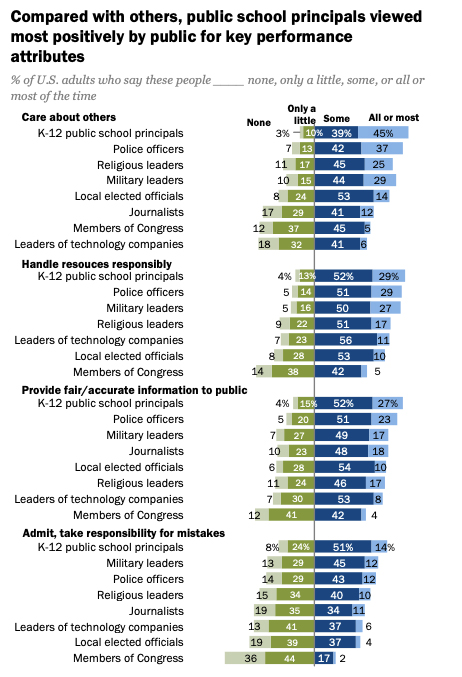 Intuitively, respondents were more likely to say principals care about others or “people like me,” followed by police officers and military leaders. Principals are also most likely to provide fair and accurate information to the public, respondents believed, and are most likely to handle resources responsibly. Pew conducted the survey — the first of its kind — between Nov. 27 and Dec. 10, 2018, through its American Trends Panel, a nationally representative group of 10,618 adults selected to complete online questionnaires. The survey had a margin of error of plus or minus 1.5 percentage points.

Of the studied groups, respondents viewed the overall job performance of principals near the middle: 72 percent said principals do a good job ensuring students develop critical thinking skills. Again, members of Congress performed the worst, with 47 percent believing they do a good job promoting laws that serve the public. 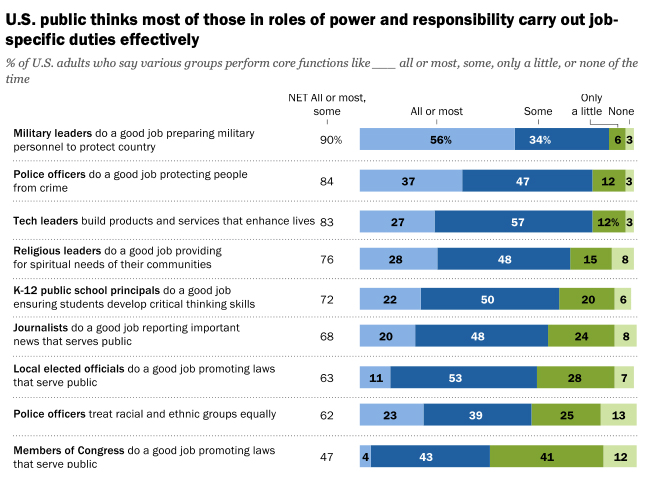 Beyond the ethics argument, Rainie said another — perhaps simpler — factor could explain principals’ high marks. Part of public school principals’ better reputation over the other groups likely comes down to their closer relationships with the general population. National actors like members of the House or Senate may seem more abstract, Rainie said, while respondents likely thought about principals they’ve known in their own lives when answering questions about school leaders.

Despite the overall optimism for principals, Pew did find demographic variations. Across all the questions Pew presented in the survey, women and those with college degrees gave higher scores to principals than men and those with lower educational attainment. Black respondents were more likely than white ones to say principals do a good job in ensuring students are developing critical thinking skills and take responsibility for mistakes.

And, given the polarizing nature of American public policy, researchers also observed a partisan divide in opinions on principals. But that gap was less profound than for other groups, such as police officers, military leaders and religious leaders. For example, 76 percent of Democrats said they believe principals do a good job ensuring that students develop critical thinking and problem-solving skills, versus 68 percent of Republicans.