Analysis: If March Madness were about schools’ graduates climbing the income ladder, UCLA would be champ

For one more day, the nation gets to continue its escape from world events via the thrills of March Madness.
While important issues of governance have been tying Congress and the Trump administration into knots, a wide cross section of the population has been preoccupied instead with the Sweet Sixteen and the Final Four, fixating on the brackets, breakaways, and buzzer-beaters.
But while the NCAA tournament appears to be all about college basketball, it’s not all just fun and games for the schools involved in the competition. The stakes for participating campuses can be high. There are the bragging rights that go with winning an NCAA championship. But that’s not all: To the winners go important spoils.
Schools with winning teams benefit from the positive national visibility, especially in increases in applications and more generous donations from proud alumni. These effects are well known. In football they have been christened the “Flutie Effect,” named after Boston College quarterback Doug Flutie’s 1984 game-winning Hail Mary pass in the last second against the University of Miami. The dramatic win put Boston College on the map, and applications jumped 30 percent over the next few years. In college basketball, there is a documented Cinderella effect, as when Davidson College, a relatively unknown school, won glory and name recognition, and the applications that go with that, when in 2008 they nearly reached the Final Four, led by Stephen Curry, who went on to attain legendary status with the Golden State Warriors.
Although March Madness is an exciting diversion, basketball should only be a sideshow to the serious business of higher education. College is about many things (yes, including sports), but one of the most important contributions America’s universities make to our society is helping students move up the ladder of economic success.
Core to the American dream is that every generation does better financially than the previous generation — and that even low-income students have a shot at moving into the upper incomes. We expect our colleges to help make this happen.
But just as some schools dominate the hoops, other schools excel at helping their students move up the income ladder.
The Income Mobility Tournament
Recent data on mobility, from the Equality of Opportunity Project housed at Stanford University, computes the percentage of students in hundreds of American colleges that move from the bottom 20 percent of income distribution to the top 20 percent.
The data allow us to compare schools on their contribution to the American dream by making intergenerational success possible.
Below we show how the schools competing in the 2017 NCAA men’s basketball bracket would stack up against one another if judged solely by social mobility. The mobility rates noted represent the percentage of students, ages 19–22 in the early 2000s, who have managed to reach the top quintile of the income distribution although their parents came from the bottom quintile (using average annual household total income before taxes and transfers).
In other words: A score of 1 means 1 percent of such students at a given school were able to climb to the top 20 percent in earnings by 2014.
Here’s how the 2017 Income Mobility Tournament would have played out: 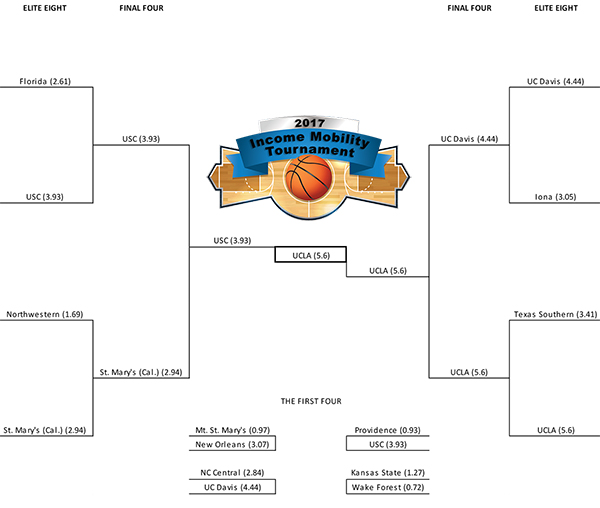 (Click here to see a larger image of the bracket, and where your college stacks up.)
Consider a few of these “mobility tournament” matchups — and how they compare with the NCAA tournament results. While the University of California–Davis basketball team fell to the University of Kansas in the first round of the tournament, UC–Davis has the second highest mobility score among all competing schools.
Consider the two economic realities: Less than 1 percent of students at the University of Kansas move from the bottom to the top of the income ladder, whereas more than four times as many UC–Davis graduates do.
Or consider Gonzaga University, which has made it all the way to tonight’s championship game. With a mobility score of 0.8, it contributes far less to the income mobility of its students than the majority of other competing schools (it ranks 58th out of the 60 teams for which we have mobility scores). Gonzaga beat Xavier (mobility score 0.9; rank: 57) in the NCAA Elite Eight, but both of these schools would have never gotten beyond the second round in the mobility tournament.
Overall, there are only a few overlaps in who advances at both the NCAA and mobility brackets. UCLA, for example, advanced to the Sweet Sixteen in the NCAA tournament, but in the mobility bracket, it takes the trophy, after defeating UC–Davis in the Final Four.
Celebrating schools for social mobility
Whichever team wins the NCAA championship tonight will be toasted throughout the nation and welcomed back to their campus as heroes. Given the timing of the NCAA tournament — which overlaps with college acceptance letters and high schoolers’ decisions on which school to attend — campuses with winning teams might even get a bump in this year’s acceptance rates. And they can expect a bump in applications next year.
In contrast, far less (if any) recognition will be given to the schools that are helping the greatest share of students rise up the social ladder in their pursuit of the American dream.
Yet, with these data in hand, some schools should finally be able to convert their contribution to economic mobility into the equivalent of the “Flutie Effect.” After all, these are the sorts of numbers and results that should be boosting applications and driving interest from young adults who want to enjoy the long-term benefits of upward mobility. As the momentary pleasures of March Madness fade, this bracket should aid the rest of us in more fully recognizing those schools that are promoting mobility.
These are the schools that are altering the trajectory of more than just a basketball.
This article was published in partnership with The 74.
Jorge Klor de Alva is the president of the Nexus Research and Policy Center. He was previously a senior executive at Apollo Education Group, Inc., and a professor at both Princeton University and the University of California at Berkeley.
Mark Schneider is a Vice President and Institute Fellow at the American Institutes for Research and the president of College Measures. He previously served as the U.S. commissioner of education statistics from 2005 to 2008 and is a distinguished professor emeritus of political science at the State University of New York, Stony Brook.