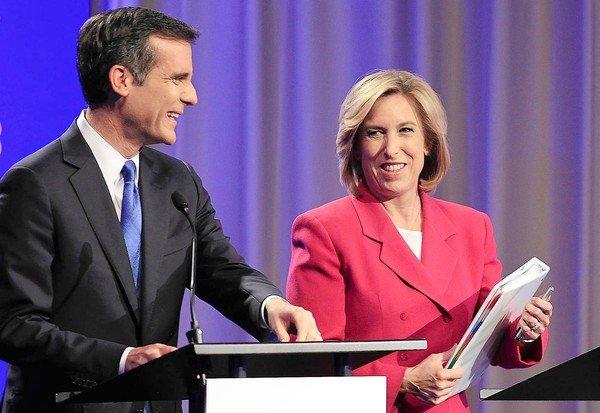 The Mayoral debates now flow like wine as the campaign enters its final month. A recent poll put candidate Eric Garcetti ahead by 10 points, so it was his opponent, Wendy Greuel, who was largely on the attack last night as the candidates debated on the USC Health Sciences campus. (She also admitted, twice, to being a bad campaigner).

The education section of the debate was predictably brief. Greuel trotted out her familiar talking points about being a mother of kids in LAUSD, and about her proposals such as a students’ bill of rights.

Most interestingly, she said she would “expand” Mayor Villaraigosa’s Partnership for LA Schools, although it’s unclear if she meant adding schools (there are already 22) or simply adding students.

“I am going to be as active as this Mayor was,” she said.

Garcetti said his goal would be to cut the truancy rate in half, and expressed support for parent colleges and vocational education — perhaps taking a page out of the book of former Mayoral candidate Kevin James, by whom he’s been endorsed. Garcetti also pledged to campaign for School Board candidates, and name-dropped one School Board member in particular: Steve Zimmer.

The two candidates will take part in a debate focused on education on May 7, at 2 PM, at the Petersen Automotive Museum. It will be broadcast on KCRW. (A previous version of this post said the debate would focus ‘solely’ on education. In fact, it will only mostly be about education.)