Arnett: Has online learning really disrupted K-12 education in the U.S.? The answer is yes — and no. Here’s why

The 2010s were the decade for technology to fundamentally change education. Two years before the decade’s dawn, Clayton Christensen, Michael B. Horn and Curtis Johnson predicted in their book Disrupting Class that online learning would revolutionize teacher-led instruction and catalyze a student-centered transformation in U.S. K-12 schools. As the decade began, enthusiasm for ed tech seemed on a steady rise. Mainstream news outlets highlighted the promise of Khan Academy and flipped classrooms. Meanwhile, schools and districts across the country committed to 1:1 initiatives that would put Chromebooks or iPads in the hands of every student. As that happened, educational software platforms such as Dreambox, ST Math, Lexia, Newsela, iReady and IXL made strong inroads into schools. And with all this enthusiasm, a handful of new terms associated with online instruction — such as blended learning, personalized learning and adaptive learning — made their way into the lexicon. Does all this online learning mean disruption has occurred in K-12 education? The answer is yes and no. If we judge disruption purely by the adoption of ed tech in schools, the disruption is well underway and continues to unfold. Christensen, Horn and Johnson predicted that by 2019, roughly 50 percent of all high school courses would involve online delivery of instruction. Though data for checking this prediction have not been collected, if we consider the general use of online learning as a likely correlate with online instructional delivery in high school courses, the data we do have suggest their prediction was on target. A 2019 survey by NewSchools Venture Fund and Gallup found that 65 percent of teachers report using digital learning tools to teach every day. Additionally, in a 2019 survey by Education Week, 96 percent of teachers reported that their schools use digital technologies to personalize learning. As online learning resources replace the textbooks, worksheets and encyclopedias of yesteryear, it’s easy to mistake them as undeniable signals of the predicted disruption. Yet that would be a mistake. The widespread adoption of online learning over the past decade has not resulted in a sweeping transformation of K-12 instruction and improvements in student performance. Online learning has been crammed on top of existing instructional models — just as Christensen, Horn and Johnson warned — leaving conventional classroom instruction largely intact. The aforementioned Education Week survey found that 60 percent of educators “rarely” or “never” use adaptive software to let students learn at their own pace. Instead, educators employ adaptive software primarily for remediation or enrichment, not for delivering core instruction in a more personalized manner. A recent McKinsey & Company report indicated that although 60 percent of surveyed teachers believed that their feedback was personalized to each student, only 44 percent of the students surveyed felt the same way. Furthermore, a 2017 study by RAND to evaluate pioneering personalized learning schools found, on average, only small measurable gains in student achievement. In short, online learning is disrupting the markets for the instructional resources schools purchase. But it has not disrupted conventional approaches to instruction to make education more personalized. Why hasn’t the growth of online learning realized its potential to transform student learning? The most often cited causes include poor implementation, inadequate professional development and strains on teachers’ time. Forty-two percent of those surveyed by Education Week indicated that their professional development on personalized learning was “effective but inconsistent,” and another 35 percent reported that theirs was either “ineffective or nonexistent.” Seventy percent of U.S. teachers surveyed by McKinsey identified “not enough time or flexible time” as their No. 1 barrier to providing personalized learning. Yet in addition to these commonsense reasons, there is likely a deeper challenge at play. The benefits of innovations often come not from the technologies themselves but from harnessing those technologies to power new ways of doing things — in other words, new processes. But changing tried-and-true processes in any system is much harder than swapping out resources. To illustrate, consider a non-education example. In the late 19th century, factories were organized to optimize access to mechanical power. At the center of the factory was a large steam engine that drove the machinery through a branching system of drive shafts, gears and belts. The friction inherent in this system meant that the power declined rapidly as distance from the steam engine increased. Therefore, the machines that required the most power were placed closest to the steam engine in the middle of the factory. 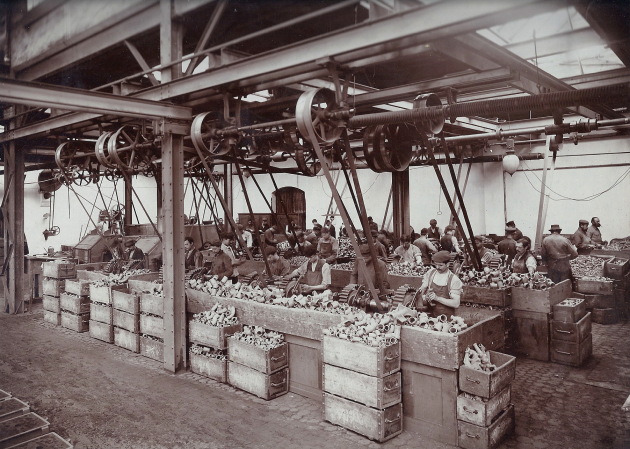 A factory in Schaffhausen, Germany, with machinery powered by drive shafts and belts (theoildrum.com)

As electrification swept the industrial world in the early 20th century, factory managers started replacing their large steam engines with large electric motors. But the new technology had basically zero effect on factory output. Electric motors were less noisy and didn’t produce smoke. But they also broke down more often than their steam-powered predecessors. Productivity gains didn’t come until three decades after electrification, when managers finally took advantage of electricity to redesign their factory layouts. Instead of clustering equipment around a large central motor, they began putting smaller motors in individual pieces of equipment and then organizing it all based on the natural flow of production. With these changes, factory productivity grew to two to three times what it had previously been. The story of factory electrification parallels the modern advent of online learning. The benefit will be minimal if schools cram it on top of conventional instructional models in hopes of enhancing achievement gains. Instead, educators need to leverage online learning to reimagine conventional instruction through new blended-learning models. Unfortunately, creating instructional models that take full advantage of online learning is easier said than done. For most educators, overhauling conventional instruction is irrational. Scrapping age-graded classrooms, teacher-directed instruction, bell schedules, required instructional minutes, letter grades, teacher roles and curriculum scope and sequence in one fell swoop is a bad idea for any school with a modicum of success. Time-tested and refined practices — despite their inflexibility to students’ individual needs — will almost always trump “innovative” practices that are unproven, underdeveloped and unsupported by the broader education ecosystem. Most successful educators are doing the right thing for their students if they take only tepid, marginal steps toward personalized learning. It may take another two decades for online learning to transform conventional instruction, just as with electrified factories. Furthermore, as Disruption Theory predicts, breakthrough approaches to personalized instruction that take full advantage of online learning will likely need to emerge from outside conventional schools, rather than within them. Thomas Arnett is a senior research fellow in education for the Christensen Institute whose work focuses on the changing roles of teachers in blended-learning environments and other innovative educational models. He also examines how teacher education and professional development are shifting to support the evolving needs of teachers and school systems.