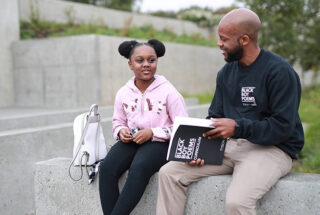 White families may have embraced pods and microschools as a short-term fix to cope with the pandemic. But for many Black parents, they offer something more permanent: an alternative to traditional schools where their children have historically faltered.

“Our motivation for building outside of the system is because we saw our system crumbling in the midst of the pandemic,” said Lakisha Young, founder and CEO of The Oakland Reach in California, which in the early months of the pandemic launched a virtual hub for students who lacked internet access. Now, the nonprofit is training Black and Hispanic parents to work as math and literacy tutors —  “liberators,” they call them — to help students thrive in local schools.

“Not only are we putting caring, committed people back into our communities,” Young said, “the system now has to re-engage with us in a different kind of power dynamic.”

As they look to build a movement, however, leaders are grappling with some thorny questions. Are they contributing to school segregation? And to what extent do they want to remain connected to the very public schools their families left?

Young was among the leaders and researchers featured in a Monday webinar hosted by the Center on Reinventing Public Education, a think tank studying the future of pods after most students have returned to traditional schools. The center’s research showed that Blacks were more than twice as likely as whites to report that their children were happier in pods — 52% to 25% — and also that they had more trust in the educators leading them than they did teachers in public schools.

The majority of Black children still attend traditional public schools — 85%, according to federal data. But CRPE researchers wanted to see whether Black pods and microschools connected to broader trends, such as the increase in Black homeschooling, the decline in public school enrollment and the growth in legislation supporting such models.

Are such policies “paving the way for an explosion in self-determined alternatives to public schools?” asked Jennifer Poon, a fellow with the nonprofit Center for Innovation in Education, which contributed to the research. “And if so, what would that mean for the families in Black pods and microschools? On the flip side, what would that mean for the majority of families who are still served by public schools?” 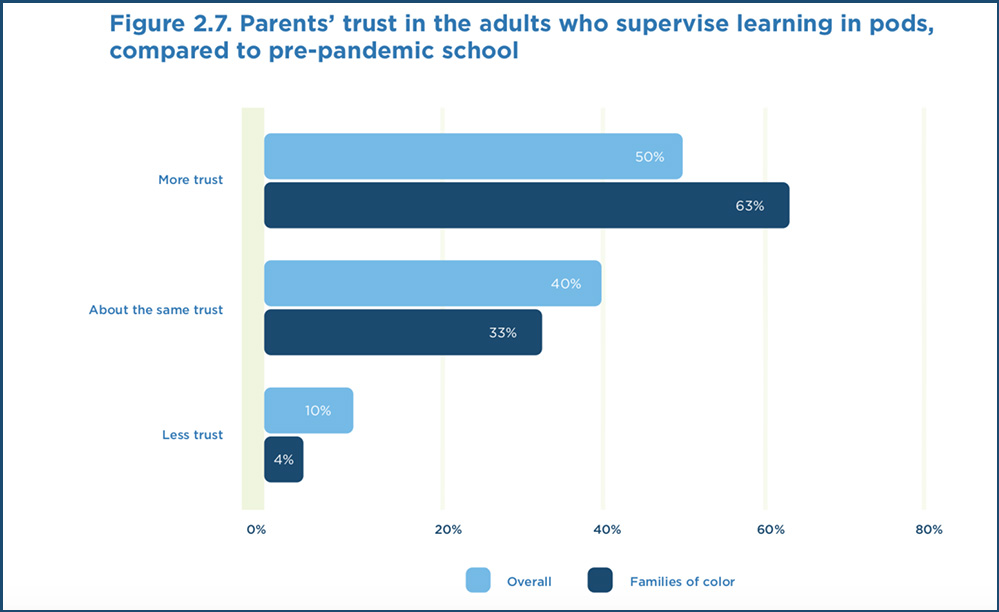 Introducing a topic often debated in the first year of the pandemic, moderator Chris Stewart, CEO of Brightbeam, a nonprofit that focuses on improving educational opportunities, pitched another question to the panelists: Do pods and microschools contribute to school segregation?

Speakers rejected the idea. Janelle Woods, founder of the Black Mothers Forum in Phoenix, said Black students are already segregated within public schools because they are suspended and expelled at higher rates than white students.

Maxine McKinney de Royston, an associate professor at the University of Wisconsin-Madison, formed a small pod for middle school students in cooperation with the Madison school district. She said “it’s a particular form of gaslighting” to blame Black parents for resegregating schools, which she chalked up to  predominantly white, middle class communities seceding from urban school districts.

While homeschool families are used to patching together a variety of learning settings and programs for their children, that is becoming increasingly true of public school parents as well, according to recent research from Tyton Partners, a consulting firm. Its “School Disrupted” series demonstrated growing interest in what researchers described as “multi-site schooling.”

Supplemental pods like those in Oakland are a part of that trend.

“In some cases, parents are looking actively and aggressively for something that schools aren’t delivering,” said Adam Newman, managing partner at Tyton. “It really increases opportunities and challenges for schools to be more creative [and to think] about how they can bridge some of these gaps, particularly around issues of equity.”

“The early pod school was the slave cabin,” he said.

And four years before the pandemic, Woods founded the Black Mothers Forum in Phoenix to support parents whose children were disproportionately disciplined in public schools.

“Our children were being criminalized and demonized for behavior that was normal for their age group,” she said.

When schools shut down, the organization launched microschools to serve students whose parents had to work and couldn’t stay home to supervise remote learning. Parents who stayed with microschools are happier, she said, because their children aren’t being disciplined for minor infractions.

Because they receive state education funds, the forum’s microschools are free for families. But Woods said foundations can help by supporting meal costs at microschools, which don’t qualify for the National School Lunch Program. It costs $6,000 to $7,000 per month to feed students, she said.

Pods and microschools serve as a “safe harbor” for some Black students, Stewart said. But in states where public funding isn’t available, many Black families can’t afford to form a pod or pay for a private microschool.

Young said she wants to see more microschools, like those in Arizona. But The Oakland Reach “evolved and adapted” to offer enrichment and tutoring support rather than establish pods outside of the district.

“For better or for worse,” she said, “most of our families are going to be in these public school systems.”