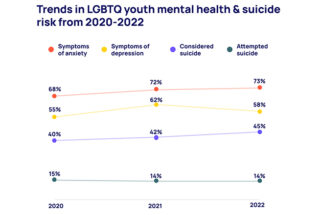 LGBTQ students whose college or university provides mental health services had 84% lower odds of attempting suicide in the past year than those who had no access, according to a new brief from The Trevor Project. And while the vast majority, 86%, reported that their college offers such services, a significant number of students cited barriers to access.

The data is drawn from the organization’s fourth annual survey of LGBTQ youth mental health, which reported steady increases in the number of respondents who report unique risk factors such as harassment, violence and the need to come out over and over in uncertain circumstances; problems finding and getting care; and negative impacts from both the pandemic and a wave of anti-transgender and “don’t say gay” legislation.

Overall, a third of LGBTQ college students seriously considered suicide last year and 7% attempted it, according to the nonprofit, which advocates for safe environments for queer youth. Both rates were significantly higher among LGBTQ students of color and transgender and nonbinary students.

LGBTQ youth aren’t inherently prone to suicide risk because of their identity, but rather because of mistreatment, says Hannah Rosen, a research associate with the organization. “The Trevor Project’s research has consistently shown that LGBTQ youth, unfortunately, deal with a significant amount of LGBTQ-based victimization, including bullying and discrimination based on their sexual orientation or gender identity.” 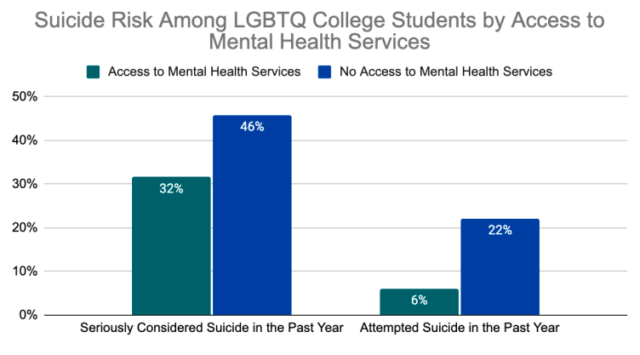 Yet, even though 86% reported their college provided mental health services to LGBTQ students, many also said there were barriers to getting care. One third said they did not feel comfortable going, 29% reported long wait lists and 17% had privacy concerns.

Queer students attending colleges with an LGBTQ center or other cultural resource also reported having fewer thoughts of suicide and making fewer attempts. More than six in 10, 63%, said their college offered these services. More than 40% of students at campuses that lacked an LGBTQ center said they had considered suicide in the past year, while 9% had attempted it. By contrast, rates dropped to 30% and 6%, respectively, on campuses with specific support services. 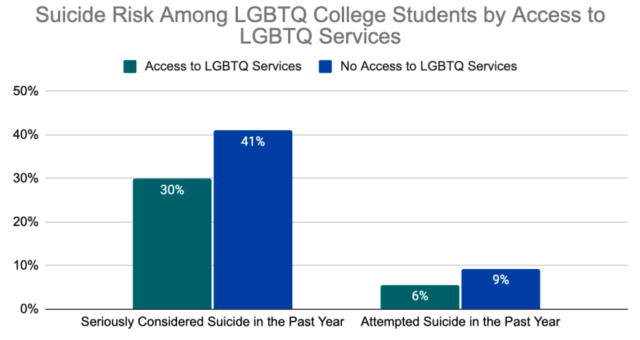 The number of LGBTQ youth overall who reported seriously considering suicide rose from 40% in 2020 to 45% in 2022, according to Trevor researchers. The number reporting depression rose from 55% to a peak of 62% in 2021, before dipping to 58% this year. Rates of anxiety rose from 68% to 73% during the same period, while the rate at which queer youth attempted suicide stayed relatively constant, at 15% versus 14%.

Virtually all transgender and nonbinary respondents to the 2022 survey reported worrying they would be denied gender-affirming medical care or access to bathrooms and sports teams.

In June, the college-ranking website BestColleges.com reported that one fourth of queer students have considered dropping out because of challenges to their psychological well-being, and 92% said their mental health has negatively impacted their college experience.

That study found LGBTQ students struggled to tap into new and supportive friend networks and to find counselors who understood their identities or who were queer themselves.

Meanwhile, the higher ed collaborative Proud and Thriving Project, which works to strengthen mental health services of LGBTQ students, found much higher rates of anxiety, loneliness, isolation among that population than their cisgender and heterosexual peers.

“No matter what amount of resources a college or university has, campus leaders can start by taking small steps to educate themselves on LGBTQ people and topics — and make their campus environment more inclusive,” says Rosen. “Even simple actions such as including gender-affirming language in materials, or self-educating about different LGBTQ identities and terminology, can make a huge difference in affirming LGBTQ college students.”

This article was published in partnership with The 74. Sign up for The 74’s newsletter.