DACA teachers across the country embrace SCOTUS ruling allowing them to ‘live, work without fear’

Bilingual special education teacher Karen Reyes was in her Austin, Texas, home, using sign language to tell a story about an elephant and a pig to her 4- and 5-year-old students, when the text messages started rolling in.

Not yet, she thought to herself, trying to stay calm, aware of the kids watching her over Zoom. Not yet.

It was 9 a.m. on the morning of June 18, and the Supreme Court had just handed down its decision blocking the Trump administration’s effort to end DACA, the program that’s allowed some 650,000 immigrants who were carried into the U.S. as children — as Reyes was — to live and work without the threat of deportation.

When she finally got a chance to glance at her phone, what Reyes saw there made her smile so widely she was sure her students thought she looked funny. When class ended, the only way she could respond to the texts was through emojis: hearts, fists and bawling smiley faces.

“It’s an immense relief,” Reyes says. “To finally have a decision — and a favorable one at that. I have no words.”

The 31-year-old filed legal statements in support of the American Federation of Teachers, the national teachers union, which was a plaintiff in a related case, Trump v. NAACP. That case and two others were consolidated into the DACA case that the high court ruled on Thursday.

Education leaders have noted that a different decision could have been another devastating blow to students, at a time when the coronavirus pandemic has ravaged the nation, shuttered K-12 schools and gutted education budgets.

“We are relieved and thankful for the court’s decision today,” said Los Angeles Superintendent Austin Beutner. “An end to DACA would significantly disrupt classrooms and destabilize school districts, producing effects that reverberate throughout communities.”

Around the country, an estimated 20,000 educators protected by the Deferred Action for Childhood Arrivals program — teachers, assistant teachers and those in the process of being certified — reacted to the news. 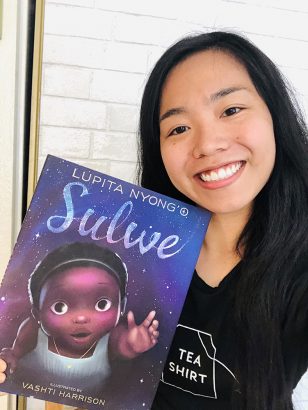 Denise Panaligan, a middle school special education teacher in Los Angeles, shared the news of the Supreme Court decision with two former students, who are now eligible to apply for DACA for the first time. (Denise Panaligan)

María Rocha, a second-grade teacher in San Antonio who came to the U.S. from Mexico at the age of 3, said she felt a surge of gratitude. Enedina Manríquez, an ESL teacher in Omaha, Nebraska, accepted congratulatory texts from her friends. Oscar Hernandez, a fifth-grade teacher in Phoenix, said he felt a sense of agony lift. Denise Panaligan, a middle school special education teacher in Los Angeles, reached out to share the good news with two of her former students, who are now eligible to apply for DACA for the first time.

In Nebraska, Manríquez had been in the middle of leading her English learner students through a conversation about their aspirations. Many said they’d like to become singers. One said he wanted to become a scientist and discover a new species. Another said she dreamed of being an astronaut and identifying a new planet.

The news from the Supreme Court means that many of the DACA-recipient teachers will get to continue pursuing their own ambitions while nurturing those of their students — at least for a while. The 5-4 ruling did not preserve DACA on the basis of merit, but rather on the grounds that the Trump administration failed to follow proper procedure in attempting to rescind it.

The outcome means that Reyes will be able to stay with her young students, who the year before she arrived had to change teachers three times in one school year due to a shortage of teachers in her specialization.

Manríquez of Omaha says she had wanted to be a teacher since high school. “I was motivated by a lot of teachers from where I went to school,” she said, adding that she’s particularly interested in helping parents who are new to the U.S. and struggling to support their children’s education.

Through DACA, Rocha of San Antonio was able to take state certification exams to become a bilingual teacher, which required that she have an ID and documents. She could then join Teach for America, where she met other DACA recipients hailing from coast to coast.

“Even though we didn’t know each other, we knew each other because of our struggles,” she says.

Reyes, for instance, remembers that the day before DACA was rescinded, her school had a holiday. She and her mother spoke over the phone and her mother, who lives 80 miles away in San Antonio, said that she wished the pair of them could be together. Reyes told her not to worry about it.

“I got a phone call at 2:30 in the morning,” Reyes remembers. “My mom said, ‘I don’t want you to panic, but can you come open your door.’ She had driven from San Antonio to be with me the day DACA was rescinded.”

Reyes says she wouldn’t be surprised if her mom shows up at her Austin home later today to share a very different moment.

“I was able to drive, live, work without fear,” she says. “Without the constant fear that I’m going to get deported at any minute.”

Her anxiety has lessened with time, she says, but it’s still there. Every two years, she and other DACA recipients have to reapply. “There’s always anxiety over whether I’ll get approved again,” she says.

While teachers nationwide were happy about the decision, all of them expressed a hope that the next administration establishes a pathway to citizenship — not only for DACA recipients but also for other undocumented immigrants, a group that includes members of their families.

“This is just treating humans with basic dignity and respect,” says Reyes. “We just want to live our lives without fear.”