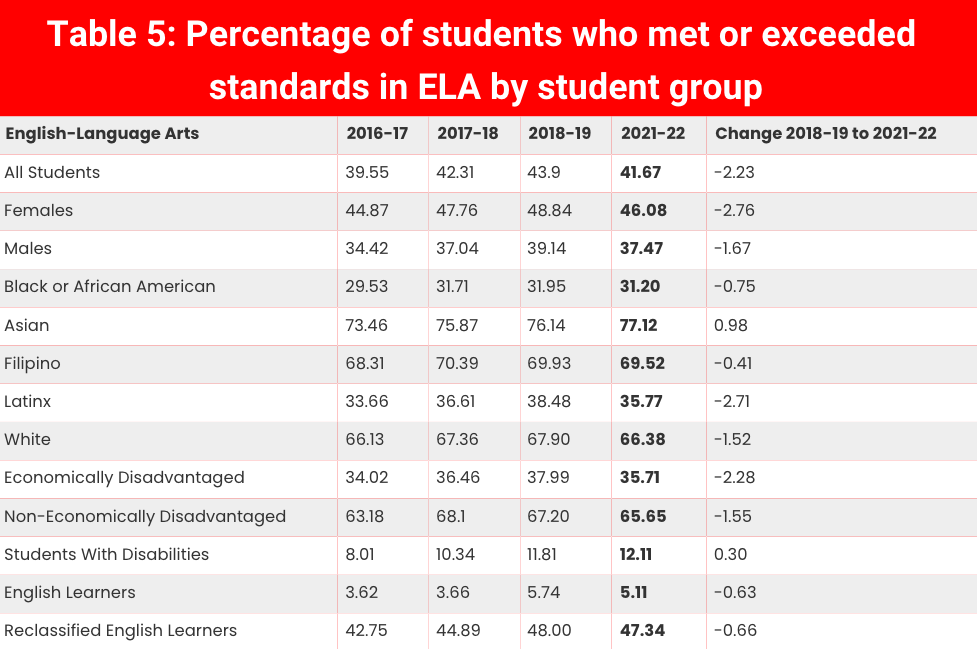 The outcomes of the 2022 Smarter Balanced assessment showed just 28.47% of LAUSD students met state standards in math, while 41.67% met English standards in the 2021-22 school year — declines of two and five percentage points respectively from the 2018-19 school year.

For Latino, low-income, Black, female, and other student groups, the declines were often greater — which was no surprise, said LAUSD superintendent Alberto Carvalho.

“Kids who were at risk, in a fragile condition, prior to the pandemic, as we expected, were the ones who have lost the most ground,” said Carvalho at a news conference. “Five years of gradual academic progress … have been reversed.” 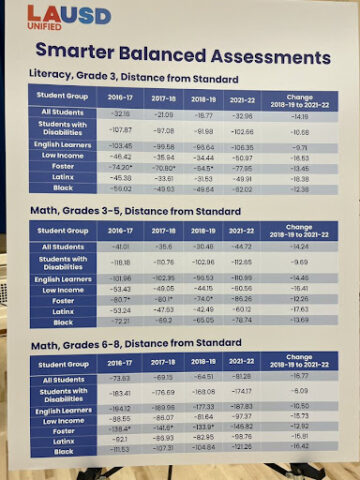 Here are highlights from the data:

1. While all students’ test scores declined, the downward trends were greater among Latino, low income, and Black students:

“It’s not surprising that they would have fared worse during the pandemic because of all the disadvantages they face,” said Pedro A. Noguera, dean of the Rossier School of Education at USC. “We could have predicted what we are seeing now.”

2. Females had greater declines on the math exam compared to males, a change from prior to the pandemic — and one of the largest declines in English scores:

While L.A. Unified female students have consistently performed better on the English assessments, the 2021-22 school year marked a dramatic change.

Females were among the groups that lost the most ground on reading assessments, with a 2.76 percentage point decline from the 2018-19 school year, compared to a 1.67 percentage point decline for males. Up until last school year, females routinely outperformed males in the pre pandemic years: In 2018-19, 48.84% of females met the English standards, compared to 39.19% of males.

“That is an anomaly, for over the past years, female students have actually been outperforming male students in math and science courses,” Carvalho said. “This is a regression that merits deep, deep analysis and research.” 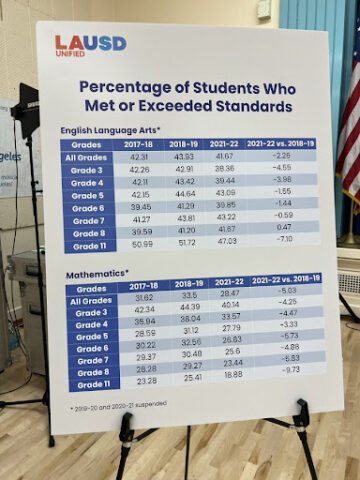 Noguera said a lack of reliable internet, access to a device, and support at home were the main drivers contributing to poor performance from low-income students.

“The general pattern in America is poor kids do less well than affluent kids and that’s because we spend less to educate the poor kids,” Noguera said. “They have less qualified teachers, they go to schools with fewer resources, and that’s true in L.A. just as it is across the country.”

This article is part of a collaboration between The 74 and the USC Annenberg School for Communication and Journalism.

Isabel Crespo is an undergraduate student at the USC Annenberg School for Communication and Journalism pursuing a Bachelor’s degree in Journalism on the pre-law track. She is passionate about ethics, education and culture.