In a major Supreme Court case that could grant educators the power to regulate student speech far beyond the schoolhouse gate, the nation’s highest court is preparing to weigh the merits of a high school cheerleader’s profanity-laden social media post.

Though the Snapchat post central to the case was filled with F-bombs and laden with teen angst, it could carry far-reaching implications for more serious dialogue after the court hears oral arguments Wednesday.

Leading education groups and the Biden administration have urged the high court to cement educators’ authority to regulate students’ off-campus speech in the name of campus safety, but a coalition of student activists — including a group borne out of the mass school shooting in Parkland, Florida — are fighting back.

For the first time ever, 192 current and former student school board members from 28 states and territories have joined forces and filed an amicus brief defending the student and urging the justices to protect young people’s First Amendment rights.

“I’d consider it the student voice case of the century because it determines if students can speak our minds off campus and if our First Amendment right is protected as youth,” said Athena Haq, a 15-year-old sophomore from Houston, Texas.

Haq said an opinion giving educators greater authority could have a detrimental effect on her day-to-day life at home and around her community. “It would just be so difficult to live in a way where you’re in constant fear of censorship and getting into trouble for living your everyday life.” 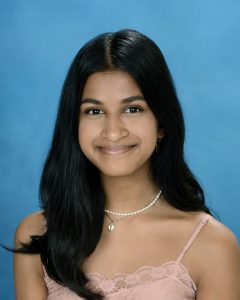 The case, Mahanoy Area School District v. B.L., centers around a Pennsylvania high school student’s 2017 Snapchat post expressing frustration because she didn’t make the varsity cheerleading squad. The post featured a picture of the student with her middle finger raised and a profane but seemingly benign caption: “Fuck school fuck softball fuck cheer fuck everything.” Though the post was uploaded on a Saturday away from school, the message made its way back to campus, where the teen was suspended from the junior varsity cheerleading team for a year.

Such punishment was necessary, school officials said, to maintain a “teamlike environment” and to prevent the school from dissolving into chaos. After filing a First Amendment lawsuit against the school district, the student won a major, overarching victory in the U.S. Third Circuit Court of Appeals, which found that the First Amendment prohibits schools from punishing students for off-campus speech, including content posted online, even if it created a disruption at school.

While students said that profanity is a common and valid form of self expression, they said a ruling in the district’s favor could give administrators authority to punish teens for a whole host of speech they disagree with, including political speech and students’ criticism of their schools. Emily Bylsma, an 18-year-old senior in Poway, California, who serves as vice president of the California Student Board Member Association, said that schools should be able to punish students for harassment and violent threats, but youth should be able to express “our core political speech.”

In her district and at many others across the country, for example, students use Instagram to highlight instances of racism and bias on campus, she said. While the posts are “not necessarily well-worded all the time” and often include profanity, she said it’s a critical outlet for students to share their experiences and advocate for change. 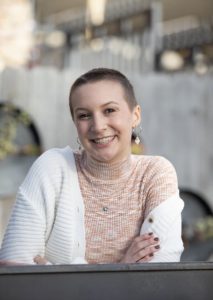 In taking up an appeal from the school district, the Supreme Court will revisit the landmark 1969 decision in Tinker v. Des Moines Independent Community School District, which upheld students’ free-speech rights in schools so long as it doesn’t cause a substantial disruption to the learning environment. The new case could settle a yearslong debate over the degree to which the Tinker opinion applies to student speech outside school grounds — especially as pandemic-era online learning blurs the lines between on- and off-campus.

The last time the Supreme Court considered a student First Amendment case was in Morse v. Frederick in 2007, when it upheld the suspension of an Alaska student who displayed a banner that said “Bong Hits 4 Jesus” at an off-campus, school-sponsored event. In that instance, Chief Justice John Roberts wrote for the majority that the speech was “reasonably viewed as promoting illegal drug use” and fell under administrators’ purview because it occurred at a school-sponsored event. 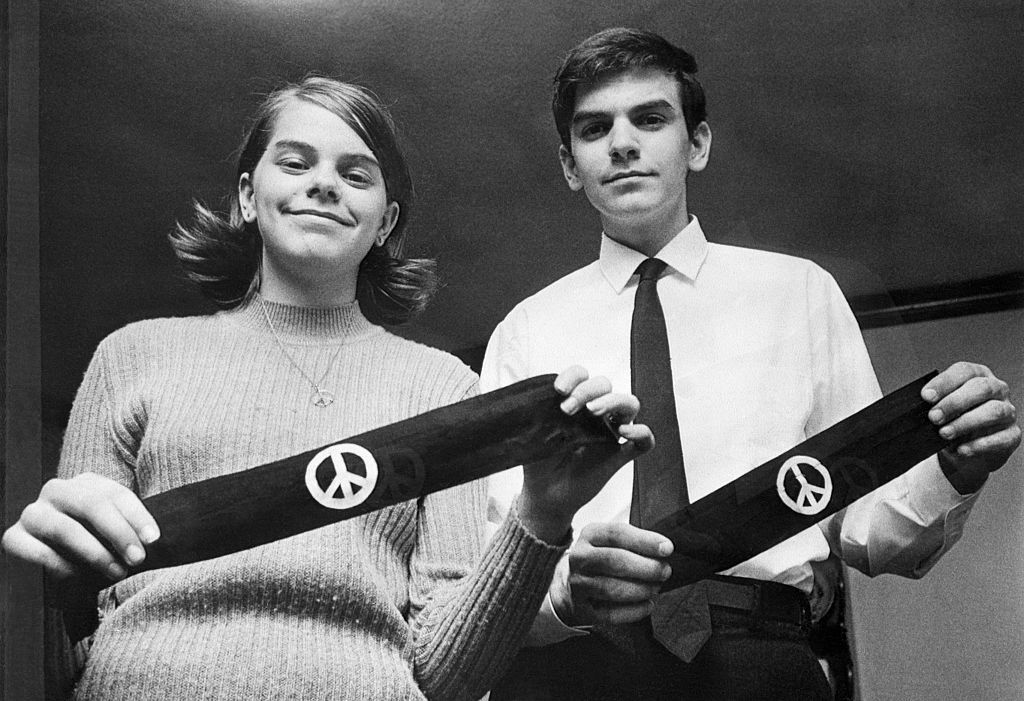 Mary Beth Tinker and her brother, John, display two black armbands central to the landmark Supreme Court opinion in 1969 that secured students’ First Amendment rights at school. The Tinkers were suspended from their schools in Des Moines, Iowa, for wearing the armbands to mourn Vietnam War casualties. (Photo via Getty Images)

In the latest case, the Pennsylvania student’s lawyers with the American Civil Liberties Union characterized her Snapchat post as a “colorful expression of frustration” on a Saturday that “did not cause or threaten any disruption at her school,” but the district held that the First Amendment permits schools to discipline student speech that is “inextricably linked to campus and inevitably affects the school community.” Such a reality is especially true during the pandemic, the district argued in its brief, as students use technology to “connect with each other in virtual classrooms” while those same platforms act as “a megaphone for off-campus speech, ensuring that it reverberates throughout the classroom and commands the school’s attention.”

Case framed as a matter of student safety

A host of leading education groups, including the National School Boards Association and the National Association of Secondary School Principals, have come out in support of the Pennsylvania district. In a brief, the groups portrayed educators’ ability to regulate off-campus speech as a matter of student safety, noting that the lower court ruling “undermines the authority of public school officials to effectively discipline students who engage in off-campus speech that harasses others or otherwise foreseeably disrupts the school environment.”

The Biden administration offered similar reasoning, writing in a brief that the lower court ruling could weaken schools’ ability to respond to violent threats and bullying. That position puts the Biden administration, which has argued for heightened gun control laws, in conflict with March For Our Lives, the student group that formed to promote new firearm rules following the 2018 mass school shooting in Parkland, Florida. In its brief, March For Our Lives, along with Student Voice and two local youth groups from Kentucky and Texas, said a ruling against the Pennsylvania student could be a major blow to youth activism, including movements that seek to make schools safer.

Matt Post, a junior at Yale University and judicial advocacy associate with March For Our Lives, countered the education groups’ focus on school safety, arguing that the district was more interested in “exercising their power over students’ lives 24-7.” The Biden administration’s brief was “disappointing for sure,” after “young people got Joe Biden into office” by turning out to vote. Like students across the country, Post participated in a school walkout after the Parkland shooting and acknowledged worry that he could be disciplined for civil disobedience. A ruling against the Pennsylvania student, he said, could make such a reality even more likely.

“When you look at safety holistically, I believe that students will be more safe when they can freely speak out about the things that make them feel less safe in school,” said Post, citing a national student movement for police-free schools that followed the murder of George Floyd. “Students need to have the ability to speak out about issues like that so as to get them addressed in order for them to feel truly safe at school and for them to actually, in fact, be safe at school.” 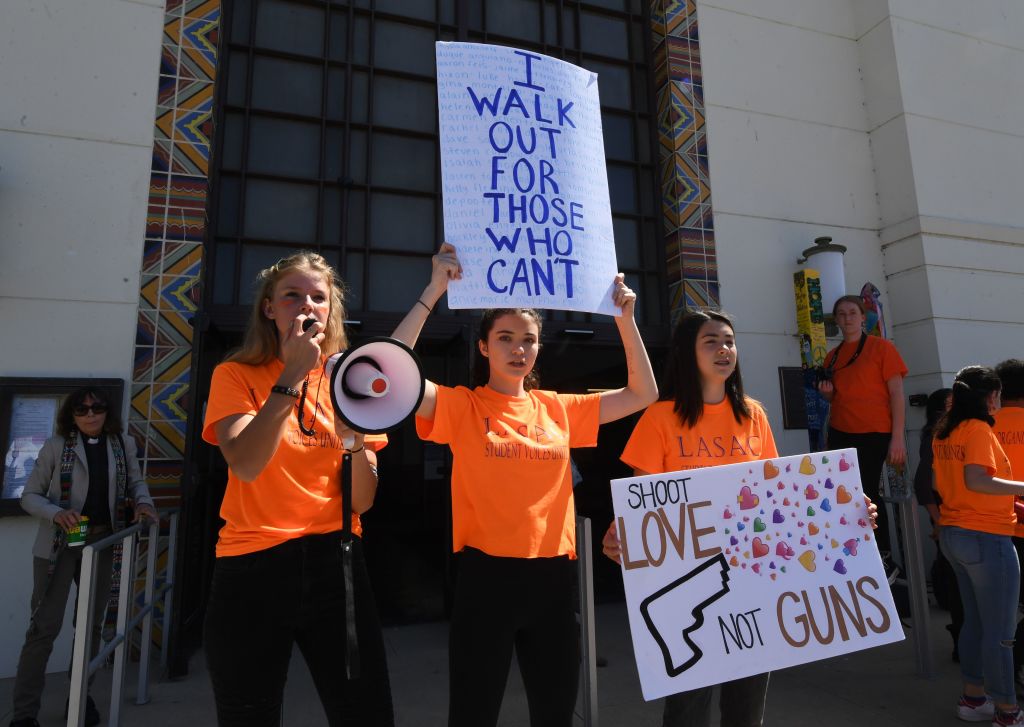 Students in Santa Monica, California, participate in the National School Walkout for Gun Violence Prevention in 2018. The walkout was organized by students at Marjory Stoneman Douglas High School in Parkland, Florida, where 17 people were killed in a mass shooting. (Mark Ralston/AFP via Getty Images)

Students in a fight for legitimacy

After the Supreme Court announced it would hear oral arguments in the Mahanoy case, Post, a recent graduate of the Montgomery County public school system in Maryland, teamed up with two peers from his state to create a national coalition of youth resistance.

Post, along with Eric Guerci and Noureen Badwi, rallied nearly 200 students from across the country to come together in support of the Pennsylvania student. In their brief to the court, the students argue that a ruling in the district’s favor could limit students, including those who serve in education leadership roles, from speaking out about problems at their schools — “especially opinions distasteful to administrators or unpopular with other students.”

While the brief notes a desire to protect students from cyberbullying and other threats, it said that laws already exist that allow schools to address those concerns without expansive authority over student speech. If students can be punished for discussing their schools off-campus, the brief argues, students could be punished for expressing core political speech about hotly debated issues central to their lives, like school reopening plans during the pandemic, education budget cuts, school discipline and abusive coaching practices. 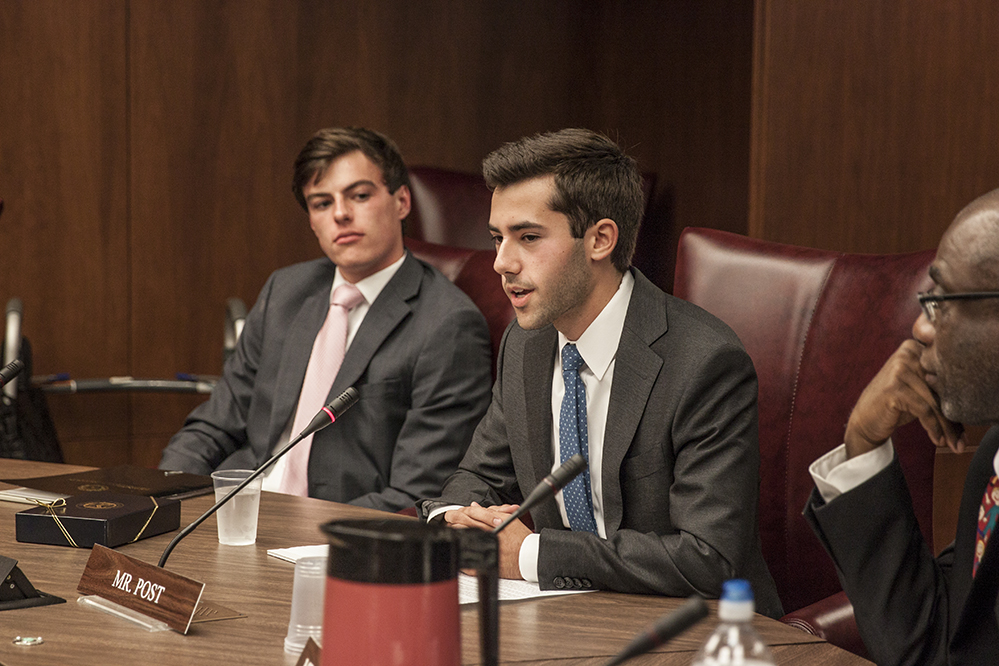 The Pennsylvania district portrayed social media as a “dystopian hellscape for students where little occurs that is not bullying and harassment,” the student brief continues, but online platforms are essential to youth interpersonal relationships and are more often used for good as teens organize protests and raise awareness about social issues.

As other groups like the National School Boards Association entered the fray in support of the Pennsylvania school district, Post said it was important to become the only educational governance voice on the other side.

“When you get students from Kentucky to California to Maryland to come together around a common cause, the stakes are high,” he said. All other “school governance voices were standing against the student, which we thought was fundamentally misguided and unjust.” 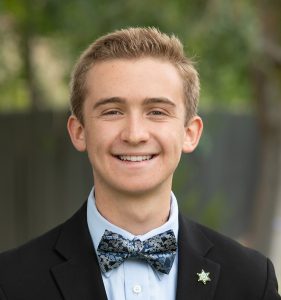 Zachary Patterson, a 17-year-old junior in San Diego and president of the California Student Board Member Association, agreed that it was important for student leaders to raise opposition to the education bureaucracy. As the student member of the San Diego school board, he has a voice in the city’s education policymaking. But student leaders, he said, must fight to be taken seriously. As education leaders bring student voices to the table, he said that youth perspectives “aren’t here when it’s convenient” for the adults — “our voices are here for when it’s necessary.”

A Supreme Court victory, Patterson said, would be a major win for student leaders’ legitimacy.

“I fight because I want students to be actual, meaningful stakeholders in the education system,” he said. “This is our chance to take that national stage and to stand up for what we believe in.”