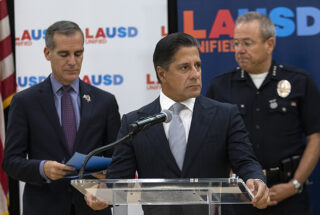 During “The Interview” hack in 2014, Pesicka was one of thousands of Sony Pictures employees that had their private information exposed in the midst of aggressive attacks by a North Korean hacker group.

“When you’re a kid, you won’t ever see a credit report and find out that there’s something on there until you go off to college,” Pesicka said in an interview. “By that time, somebody has had 15 years to rack up a bunch of different credit cards or properties or whatever else on your kid’s account…so that’s very concerning.”

Like Pesicka, LAUSD parents have raised concerns about the district’s response to the cyberattack, ranging from long term data protection to how well a hotline — created to answer parents and staff questions — is working.

The public release of about 500 gigabytes of stolen district data was posted on the dark web Saturday by Vice Society, a Russian-speaking ransomware gang known to target school districts.

After the district and law enforcement analysts reviewed about two-thirds of the data, LAUSD Superintendent Alberto Carvalho assured students, parents and employees that there is no reason for widespread concern.

“The release was actually more limited than what we had originally anticipated,” Carvalho said in a press conference Monday downplaying the damage done.

Carvalho said any exposed student data – including names, academic information and personal addresses – was between 2013 and 2016, insisting most middle and high school students during that period already graduated.

For now, Carvalho confirmed students who did have their data breached will be contacted and offered credit monitoring services.

But many parents were not convinced the superintendent’s response was enough to ease their concerns about the cyberattack.

When Pesicka’s private information was exposed, Sony offered her one year of credit monitoring. But she found out years later she had a stolen identity and social security number.

“I had three people working under my social security number and I had my identity compromised,” Pesicka said in an interview. “Anybody who’s been through identity theft knows how difficult it is and how there’s not really a streamlined process or way to scrub your information.”

Teresa Gaines, the mom of 2nd and 3rd grade students at Grand View Boulevard Elementary School, was troubled by Carvalho’s response because it didn’t provide the urgency she was hoping for.

“Some people don’t realize how serious this can be because what if five or ten years from now our kids go to college and all of a sudden they get denied entrance because of something that is not their fault…or somebody uses that data to cause issues that prevent them from getting into certain programs or denied work,” Gaines said in an interview.

Gaines also said LAUSD should provide more targeted outreach to families through “town halls” and “informational webinars” so parents could ask questions about the cyberattack.

She is particularly concerned by the release of psychological assessments, which Carvalho insisted did not happen during his press conference. However, the Los Angeles Times did find one example from 2005.

For Jenna Schwartz, the mom of a 7th grade student in North Hollywood, Carvalho’s response left her cautiously optimistic.

“If I find out I was impacted…but it was just my child’s school photograph from 2013 and his attendance record, I don’t care as much,” Schwartz said in an interview. “If it was my social security number and bank information, those are two very different scenarios.”

Carvalho pointed parents to the district’s hotline, available Monday through Friday and this weekend for additional questions or support on the cyberattack.

But parents reported long wait times, and limited hours and information when the hotline began earlier this week.

“Unless you ask a question that fits into their script, they don’t really have a response,” Pesicka said in an interview. “And even if you do, you’re getting a very robotic response.”

In addition, Scwartz noted that she’s “not sure what good the hotline is at this point other than sort of just to make people feel better.”

After a request for comment, a spokesperson from LAUSD referred back to Carvalho’s statement on the cyberattack: