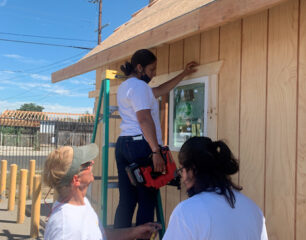 Students and young adults in Los Angeles have mostly built a tiny house this summer as part of the new Los Angeles County Skilled Trades Summers program. Students learn construction and other trade skills while also being paid like in a normal summer job. (Courtesy of Harbor Freight Tools for Schools)

Marco Chavez presses a foot-long piece of bare wooden siding into a gap along a window and pulls the trigger on his drill.

Chavez, 17, a recent graduate of College Bridge Academy, a charter high school in the city of Compton in Los Angeles County, steps back and nods while his instructor watches him.

This “tiny house” on top of cement blocks in the parking lot of the non-profit Los Angeles Education Corps. is coming along nicely, as is the construction training of Chavez and more than a dozen classmates in the group’s summer program for youth.

This five-week paid program is one of five projects serving more than 200 county youth, many in charter schools or academic recovery programs, in the Los Angeles County Skilled Trades Summers program, which is privately funded by Harbor Freight Tools for Schools, a program of the Smidt Foundation.

The sites, which teach skills ranging from solar panel installation to welding, to auto repair, are all efforts to at least nibble away at a skills gap facing Los Angeles and the nation by teaching students introductory skills that businesses are craving.

There has been a national push in recent years to highlight a shortage of people with Career Technical Education, formerly known as vocational training. Several training models like apprenticeships and internships — and even a hybrid called “apprenternships” — have sprouted across the country to fill that gap. Summer jobs that align with potential careers are another promising option.

Kendra LaRose, who organizes Chavez’s lessons, said she wants to give students who might not be able to study trades at their high schools a chance to earn skills and certifications that can land them better jobs. Even students that decide to go to college instead of construction, she said, still gain useful skills in the program and learn what employers expect in the workplace

The Skilled Trades Summers program, now in its second summer, is just one of several training efforts for young people. Though still small — just 200 students in a county of 10 million people — it meets two key criteria for helping low-income youth: competitive wages and teaching valuable skills.

Unlike volunteer summer internships that only help the affluent, the program pays the area’s minimum wage of $16 an hour; and avoids making students pick between training for the future and helping families pay immediate bills. 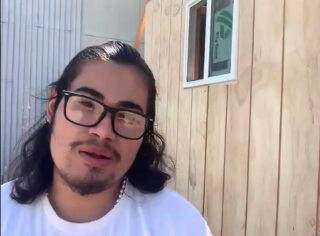 Marco Chavez, 17, has gained an appreciation of construction trades in his summer with the LA County Skilled Trades Summers program and is now weighing whether to become a contractor. (Harbor Freight Tools for Schools)

Chavez, the son of Mexican immigrants, plans to attend community college this fall to study software engineering, he said he chose this program to have career options and because the skills might help him personally.

“Like if something were to mess up in my own house, you know, it’d be something that I know how to fix,” he said.

After several weeks of building this tiny house and trying out carpentry, plumbing and electrical work, he’s considering building on these lessons to become a general contractor.

“I grew a liking to it, and the skills I learned from it,” he said.

Carlos de la Cruz, also 17 and also a 2022 graduate of the same high school, said most of his friends are working retail jobs this summer, but he’d rather be working with his hands. He said he has liked most skills he has tried this summer and will keep working in construction while he figures out a long range plan.

“I liked plumbing,” he said. “Also, like carpentry, finishing work…I don’t think there’s any part of it (I don’t like) other than, obviously, being in the hot sun, but that’s not so important.”

Dave Lefkowith, who is leading Harbor Freight’s training work in Los Angeles after working with a similar Louisiana program called Jump Start, said there is a real need for teaching more of these skills, but a challenge in expanding them in schools. The equipment and needed space are expensive, he said, other than at full Career Technical Education schools and the tasks need more time than a typical high school class period allows.

So he’s experimenting with mobile training labs at dedicated sites like in this summer program that have whole days to work with students without competing with academic classes.

“I think the best immediate potential for expanding high quality skilled trades training and education…rests in making better use of non-traditional times. non-traditional venues as well,” Lefkowith said. “Certain high quality outcomes are possible but outside of the normal school day, where the barriers to achieving the same accomplishments are very substantial.”

For standard construction trades, building a tiny house — an 8×15 sonoma shanty in the L.A. Education Corps. parking lot — fits the bill. It will eventually be moved for a still to be determined owner. For solar installation skills, students split training time between offices of the Grid Alternatives non-profit solar provider near downtown and Alliance for Community Empowerment offices in Canoga Park. Students also travel to two homes nearby that are receiving free solar panels to work with and observe GRID Alternatives employees installing them.

“They’re not working on a mock roof,” said Michelle Fuentes-Miranda, the Alliance’s founder. “The actual roof is an actual install. They get to see the family’s faces that are going to receive this gift.” 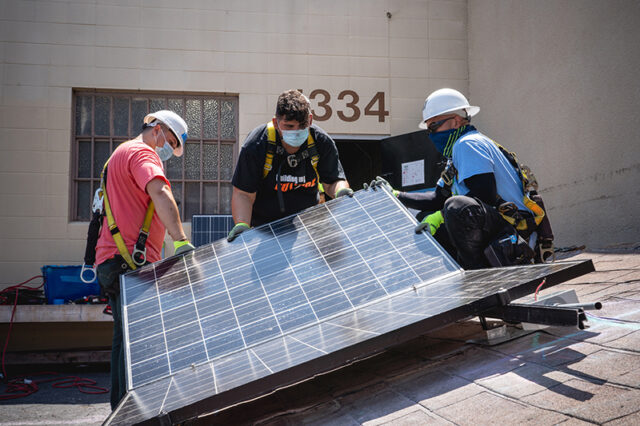 Students in the solar portion of the L.A. County Skilled Trades Summers program learn how to mount solar panels on roofs in classrooms first, as shown here from last summer, before they join professionals and help put them on real roofs. (Ben Gibbs/Harbor Freight Tools for Schools)

Even traditional school officials, who are ramping up their own efforts to connect students to trades, say more programs like this are useful. Esther Soliman, administrator of the Los Angeles Unified School District’s work experience department, said she has not yet learned details of the program, still in post-COVID infancy, but called it a “fantastic idea.”

“Construction is going crazy right now in the area,” she said. Helping kids learn about a possible career in a paid internship, she said, is a “win-win situation.”