More than half of students are not tuning in to online classes, informal teacher survey shows

As remote learning ramps up and more states announce that school closures will last through the end of the academic year, a new teacher survey suggests many students are still missing from their virtual classrooms during the coronavirus pandemic.

Fifty-five percent of teachers said more than half of their students have not been tuning in to remote classes in the informal survey conducted by the social media app Fishbowl.

From April 6 through April 9, the app asked teachers “How many of your students are attending your remote classes?” Educators could choose from four responses: 0-25 percent, 26-50 percent, 51-75 percent, or more than 75 percent.

Of the 5,659 who responded, 35 percent said the attendance rate was 25 percent or less, while just 17 percent reported at least 75 percent of students were attending class. The survey is not scientific and not much information is available about where the teachers work. Fishbowl said nearly 97 percent of the self-selecting respondents teach in district schools. 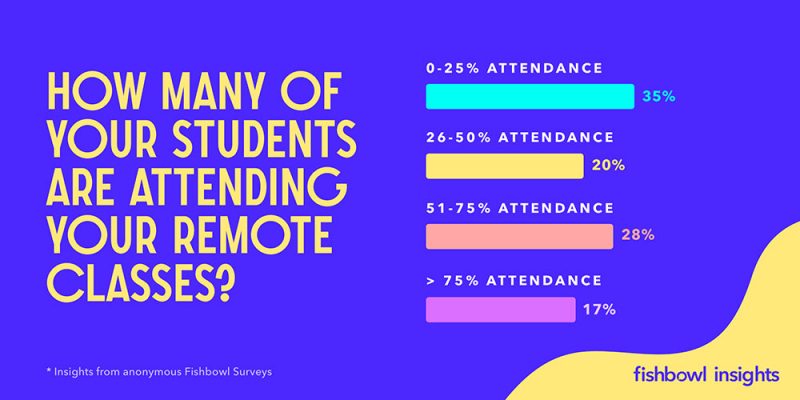 The Fishbowl team created the poll after seeing that educators using the app were discussing obstacles related to student engagement, including lack of technology and the hurdles faced by working parents, spokesperson Becky Graham said.

“It really was just based upon some of the conversations that were happening on the platform and some of the challenges we were witnessing [teachers] dealing with firsthand,” she said.

Fishbowl is an app-based social network that allows people to anonymously discuss their workplace with others from their industry or company. The app first opened in 2017 to consultants and later allowed people who work in select fields, including education in 2019, to join, according to the magazine Ad Age. The app verifies that users work in a certain field before they are added to its discussion page, which is called a bowl. Graham said tens of thousands of teachers use the app.

With more than 55 million students out of class, many for the remainder of the academic year, schools and districts across the country have taken a range of approaches to distance learning, with some teachers offering real-time lessons via video platforms like Zoom and others simply handing out paper packets for kids to complete. About 70 percent of schools had a plan in place for remote learning as of April 7, according to data collected by the American Enterprise Institute. How districts track attendance also differs, with some looking for students to sign in to a learning management platform each weekday and others relying on teachers to reach students by phone regularly.

A number of issues can disconnect students from school, from homelessness to lacking internet service or not having enough devices for every child in a family. Moreover, chronic absenteeism — missing a significant portion of the school year — is an issue even when traditional classes are in session, with millions of kids often missing school every year.

Research indicates frequent absences are associated with lower test scores and increased risk of dropping out of school. Robert Balfanz, a Johns Hopkins University researcher who studies student attendance and graduation patterns, said he has two levels of concern about students who are not engaged with remote learning. First, those students are missing out on learning opportunities and may fall behind academically. Second, they’re losing their connection to school, which could make it harder to get reengage next year.

“There’s sort of a double hit,” Balfanz said. If students are losing both learning time and their relationship with the school community, the two will reinforce each other next year, causing those students to struggle more and, if they are older, putting them at risk for dropping out. To improve attendance, Balfanz said educators should try to keep the nonacademic parts of school going, such as by having clubs continue to stay connected or asking students to work on projects together outside of their regular lessons.

“We’re already hearing a lot that kids can only be online learning for so many hours of the day, but there’s a lot of other hours in the day,” he said.

Of the nine states where at least 100 teachers responded to the Fishbowl survey, Michigan had the lowest reported attendance, with nearly 62 percent of teachers saying their attendance rate was 25 percent or less. New Jersey educators reported the highest student participation among that group, with two-thirds of teachers saying that more than half of their students were logging on.

New York, which includes New York City, America’s largest district with 1.1 million students, was in the middle of the pack, with about 43 percent of teachers reporting that more than half of students were attending remote classes. Other states that had at least 100 teachers responding were California, Georgia, Illinois, North Carolina, Ohio and Texas.

Education Week posed a similar question to teachers April 7 and 8, asking “What percentage of your students are essentially ‘truant’ during coronavirus closures?” Public school educators reported an average of 22 percent of students were missing class; those in schools with more students from low-income backgrounds said they were seeing higher absence rates.