‘Nail in the coffin’: LAUSD parents and employees predict disaster if workers strike 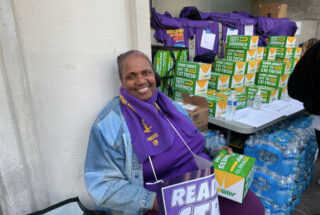 If LAUSD workers, parents, and administrators agree on one thing it’s that nobody wants a strike.

Earlier this month, the union representing Los Angeles Unified’s service workers — including 30,000 custodians, bus drivers, cafeteria workers, and special education assistants — issued its clearest threat to date in its years-long contract negotiations with LAUSD, announcing that it would hold a strike authorization vote this month.

SEIU Local 99’s members regard the prospect grimly. Earning an average annual salary of $25,000, many said they could not afford to forgo a paycheck.

Yet, between now and Feb. 10, they plan to vote in favor of the work stoppage.

“We’re having a hard time making it,” said Hugh Alston, a special education assistant at 93rd St. Elementary. “I would reluctantly have to vote yes. All of us. We’d stick together.”

Superintendent Alberto Carvalho said at a press conference earlier this month that concluding contract negotiations with Local 99 was his “highest priority,” and promised to “offset the pressure of inflation for all our workforce” with “a multi-year contract that will, at all levels, outpace what has been provided to other workforce groups across the country.”

“If we are to retain, incentivize, and recruit the highly skilled workforce we need as far as teachers and support staff, we need to provide adequate compensation that addresses the critical challenges facing anyone in this community,” he said.

Though financially padded for the current school year, LAUSD officials expect budget cuts over the years to come, with persistent absenteeism and declining enrollment, the latter due in part to exasperated parents fleeing the district. Families still recovering from remote schooling and other pandemic disruptions worry that a strike could be the “nail in the coffin” for LAUSD.

“I can absolutely tell you that one more major disruption like that, that’ll be it,” said Christie Pesicka, a parent advocate in the district. “Enrollment will plummet again.”

An LAUSD spokesman declined to comment on how the system would respond to a strike, refusing to lay out a backup plan for services like bussing, food prep, cleaning, and after-school programs. He also would not say if the district was considering remote schooling.

What is clear is that workers are angry. In an interview with The 74, Local 99 executive director Max Arias described the union’s rally in front of the district’s administrative headquarters in December as “militant.”

“I fully expect that it’s gonna go through,” he said of the strike authorization vote.

The union’s members have been working without a contract since June 2020.

Initially, that was because of the pandemic. While teachers and administrators carried out their duties remotely, many service workers kept at their on-site tasks, cleaning facilities and preparing sack lunches. Little time, said Arias, was left for collective bargaining.

Negotiations resumed with the easing of COVID restrictions, but the two parties have been at loggerheads. The district’s latest move came in December, when it offered the workers a 5% wage increase for each of the 2021-22, 2022-23, and 2023-24 school years and a couple of one-time bonuses.

Local 99 characterized the offer as insufficient and divisive, and in late December declared impasse before California’s labor relations board and requested a mediator to shepherd the parties towards an agreement.

“To date, LAUSD is not engaging in good faith negotiations regarding proposed contract language changes,” reads the request for mediation. “Ever since we started this process, LAUSD has not seriously considered most of our proposals.”

Workers say poor conditions, a lack of respect, and resulting staffing shortages harm morale and threaten the smooth operation of school facilities, making some of them unusable

“We have urinals, toilets — we have sinks — that haven’t been serviced in two years,” said Edna Logan, a building and grounds worker at Manual Arts High School in South Central LA. “It’s across the board where we are low-staffed.”

Logan said she plans to vote yes on authorization even though she doesn’t “want it to come to that.”

“We have to send a strong message,” she said.

Alston, whose role as a special education assistant guarantees him only six hours a day, works a second job nights and weekends in order to afford the rising cost of living in Los Angeles.

He’s considered leaving the district — and he’s not alone.

Thomas-Parker, whose husband supports the family with a second income, said her main demand is more respect for her work.

“It’s so rude and so toxic to where I don’t want to have nothing to do with them,” she said. “It used to be fun to work for LAUSD. It’s not fun anymore.”

Until Feb. 10, Local 99 representatives will collect ballots from the union’s 30,000 members at designated sites. Meanwhile, California’s labor relations board has assigned a mediator to the case.

Logan, also a member of the union’s bargaining team, wants one thing to come across clearly during mediation: “Without me, without my counterparts, the school would not be able to function.”

Parents, many of them service workers themselves, understand that keenly. According to Pesicka, they fear a reprise of the chaotic remote-learning months.

“Everybody’s exhausted,” said Pesicka. “It’s so much easier just to go to a neighboring school district, or to go to a charter school, or to go to a private school if you can afford it.”