‘No one knew we were homeless’: New relief funds fuel efforts to find students lost during virtual school

Portia and 13-year-old Quentin bounced back and forth between a homeless shelter and a one-bedroom apartment they shared with her mother last year, but his school was unaware of the disruption in the boy’s life. (Liberty Life Church)

Portia and her two boys were living at the St. Ambrose Family Shelter in Dorchester, Massachusetts, located in an old Catholic church, when the pandemic hit.

To protect her family from the virus, she moved in with her mother in a one-bedroom apartment. But with a baby brother in the same room and unreliable Wi-Fi, 13-year-old Quentin began to struggle in school. Then the landlord threatened to evict them, calling the arrangement a fire hazard.

By May, Portia and family had returned to the shelter. “We were just moving so fast that I didn’t even have a moment to tell a teacher, ‘This is the situation,’” said Portia, who declined to give her last name to protect her identity.

She worked full time and fed the children in her car because the kitchen closed at 6 p.m. She occasionally broke the rules, cooking them ramen noodles and oatmeal in an electric kettle she snuck into their room.

The whole time, Quentin’s school knew nothing of the disruption in his life.

“No one at the school knew we were homeless,” said Portia, who finally landed at her own government-subsidized apartment in July.

Her story is a common one among families that have gone without stable living arrangements over the past year. With students learning remotely — and sometimes leaving their cameras off during Zoom sessions — teachers and other school staff have missed many of the clues that students lack permanent housing.

Under the $1.9 trillion economic stimulus bill passed in March, the federal government has dedicated $800 million to support homeless students, a commitment that advocates say will go a long way to finding those students and addressing their needs. This comes on top of a temporary child tax credit included in the same law, which could cut child poverty in half and which advocates hope will be made permanent.

About 1.5 million school-age children in the United States are homeless, according to federal data. Last fall, researchers estimated that many of them were among the 1 to 3 million students potentially missing from classrooms during remote learning. Experts say that even homeless students who have a device might not have Wi-Fi or a place to charge a laptop.

“Identification is hard because we depend on teachers and social workers and others to see what the signs are,” said Deborah Dempsey, a homeless student advocate for the Kane County Regional Office of Education, outside Chicago.

The 34-year-old Education for Homeless Children and Youths program, also known as McKinney-Vento, ensures that children living in shelters, hotels or “doubled-up” with other families can stay in their school. It also guarantees transportation and access to additional services, such as referrals to housing, food and health care.

But the law wasn’t designed with distance learning in mind, and many families are reluctant to volunteer that they’re living in a car or moving from couch to couch. “We’ve got this federal law with a set of rights that is being overlooked right now,” said Barbara Duffield, the executive director of SchoolHouse Connection, an advocacy organization. “The delivery system is not being used.”

The new federal funding is eight times the amount states typically receive through McKinney-Vento and represents a significant change from the two relief bills passed last year. States had the option of using previous funding to give homeless students extra academic support and help with basic needs, but according to SchoolHouse Connection’s November survey of over 1,400 homeless liaisons, just 18 percent responded that their districts used them that way. By contrast, the American Rescue Plan dedicates specific funds for homeless students, allowing districts to increase staff to help identify them and connect them to other services.

Last Friday, the department of education issued a letter to state school chiefs outlining how much they’ll receive and urging them to support districts that don’t have a lot of experience serving homeless students. Secretary of Education Miguel Cardona, Senate education Chair Patty Murray of Washington and Sen. Joe Manchin of West Virginia held a roundtable discussion with students who have experienced homelessness. Some said their schools had been sources of comfort but others said teachers were often unaware of their struggles.

“I didn’t receive any communication from my school,” said Eric, a high school senior from Texas who lives with friends. “I kind of wish my teachers had tried talking to me instead of counting me absent. They just kind of wrote me off.”

In North Carolina, homeless liaisons plan to use the new funds to rebuild relationships with students who were the most disconnected from school this year. They’re planning afterschool, weekend and summer tutoring programs and creating remote learning and homework corners in homeless shelters. Sheryl Kimbro, the director of accountability and testing for the Pender County Schools, along the coast, said the goal is to provide more in-person services.

“Our students have had three years in a row in which they have missed a significant portion of face-to-face instruction,” Kimbro said, noting that during the 2018-19 school year, schools closed for a month because of Hurricane Florence. “Our students are going to need as much support as possible to help bridge any gaps.”

The district works with a network of churches in the county to gather food for needy families. Volunteers gather at Pender County Christian Services to stuff backpacks full of mini cereal boxes and fruit cups to deliver to schools. 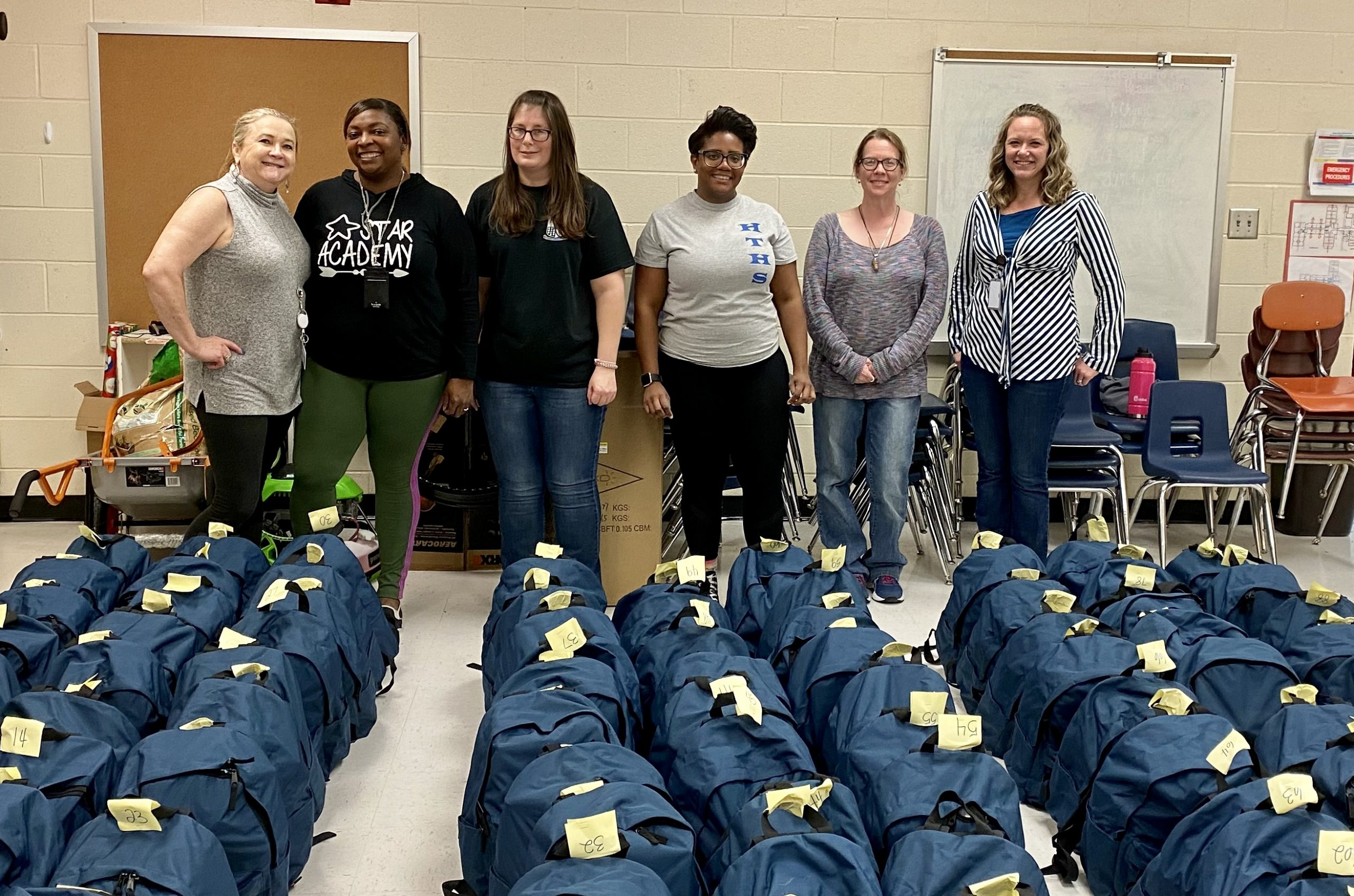 As more families faced pandemic-related hardship, Sandy Harris, executive director of the nonprofit, saw the cost to stock her food pantry more than double in 2020 — from $32,000 to $67,000.

“A lot of these are single mothers who had to quit their jobs to stay home with their kids,” she said. “They sit here and cry, and all I can do is what I do.”

The latest relief bill included another $25 billion for rental assistance, but those programs often don’t reach families doubling up with friends and family. With the pandemic-related eviction ban expiring June 30, advocates are concerned more students will face homelessness this summer.

Harris keeps in close contact with the Pender district’s liaisons to ensure families at risk of homelessness are receiving assistance — the type of partnership the new federal funds can support.

Last year, Pender County residents Michael and Casey Guerriero wondered if they would lose their home and if their children would have to change schools again. They had just gained custody of Michael’s three school-age children from a previous marriage when the state locked down last March. They enrolled the boys, who had been living with their mother in Wake County, in the Pender County district, but due to the shutdown, the children’s first contact with classmates and teachers was through Google Classroom.

When his job as an electrical worker slowed down, he didn’t know if he’d be able to pay the rent. He suddenly found himself tracking three remote and in-person school schedules on a whiteboard while picking up side work mowing lawns. Guerriero turned to Harris’s organization for groceries and help with Christmas presents.

“There were times where we were sitting up, scratching our heads and wondering what we were going to do if things got worse,” he said. Because he was still working, he didn’t qualify for unemployment or other government support.

“I’m in a bracket where I’m right in the middle and can’t get assistance,” he said. 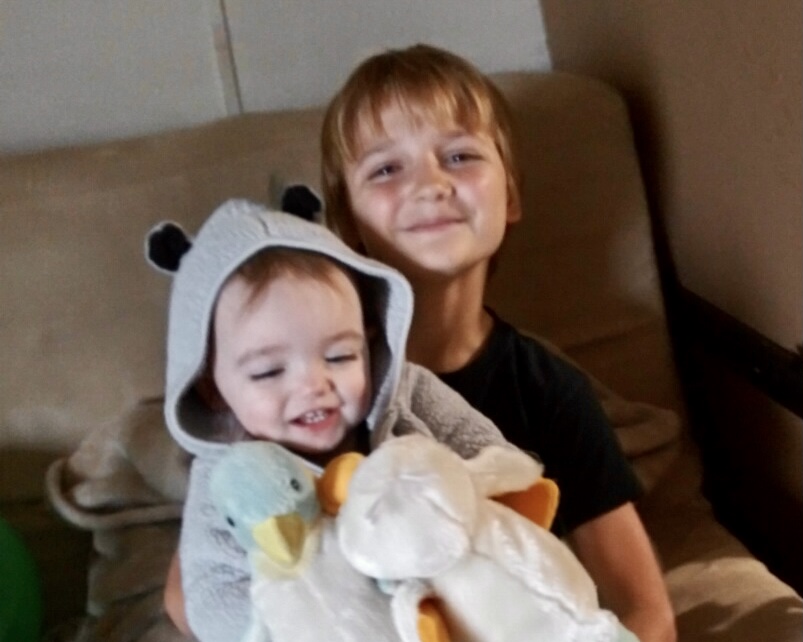 Weylyn Guerriero and his sister Sienna.  (Courtesy of Guerriero family)

Recent data showed that more than 8 million households were behind on rent in December, and the number of those at least three months behind on their mortgage payments — over 2.1 million borrowers — had reached levels not seen since the Great Recession.

According to a weekly University of Oregon survey of families on their experiences during the pandemic, 40 percent of those who have received at least one stimulus check have put the money toward rent or mortgage payments.

As difficult as it can be to identify K-12 students with unstable living arrangements, it can be even harder to find families with younger children outside the school system that can benefit from the new relief funds. According to federal data, there were an estimated 1.4 million homeless children under age 6 in 2017-18.

In 2016, the U.S. Department of Health and Human Services issued regulations stating that child care programs receiving federal funds should prioritize serving homeless families with young children — and that, like schools, they should serve those who might have moved in with friends of relatives.

In the Boston area, that rule spurred a stronger relationship between the nonprofit Horizons for Homeless Children and the Boston Public Schools.

“We reached out and said, ‘We know you have children registered as homeless, and my guess is they have siblings,’” said Kate Barrand, president and CEO of Horizons, which has three early-childhood centers and “playspaces” in 90 family shelters throughout Massachusetts.

Amid the chaos, Portia and her sons experienced last year, a Horizons center offered some sense of stability. A caseworker helped her file for unemployment when she temporarily lost work at a health care office and texted her when she heard about free diaper programs and gift card giveaways. Horizons has delivered food to families and made a one-time deposit of $100 into their bank accounts — services they’ve never provided before, Barrand said. 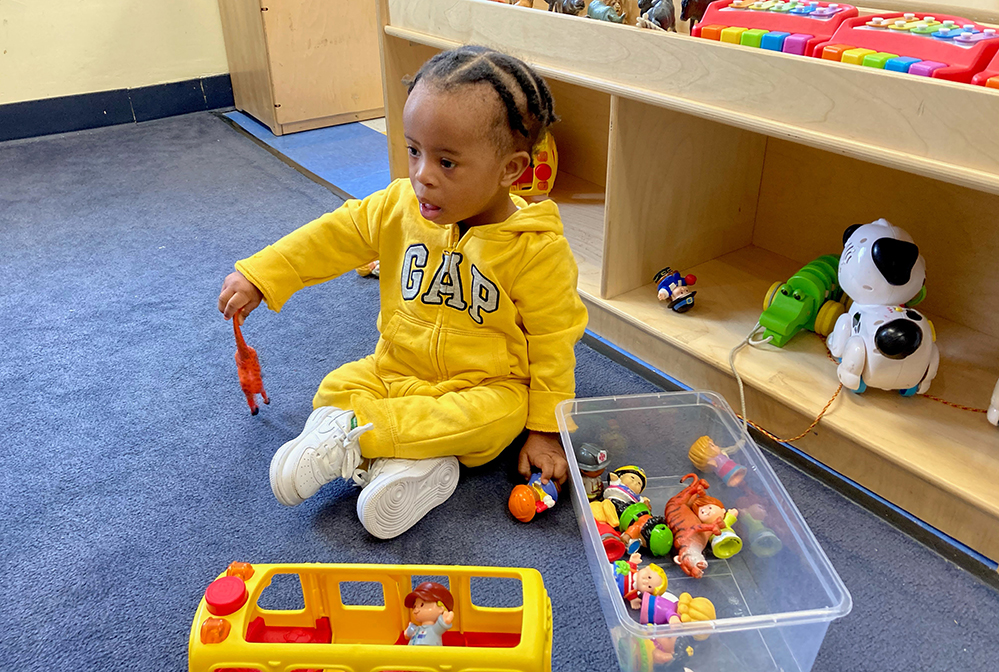 Eighteen-month-old Christian at the Horizons early-childhood center in Dorchester. (Horizons for Homeless Children)

Before last year, Portia’s son Quentin usually made the honor roll at his charter school. But as his family moved and bounced between internet providers, his grades began to drop.

Now in their new apartment, he has better Wi-Fi and a quiet place to do his work. “There’s no excuse for him to not get on that Chromebook and go,” she said.