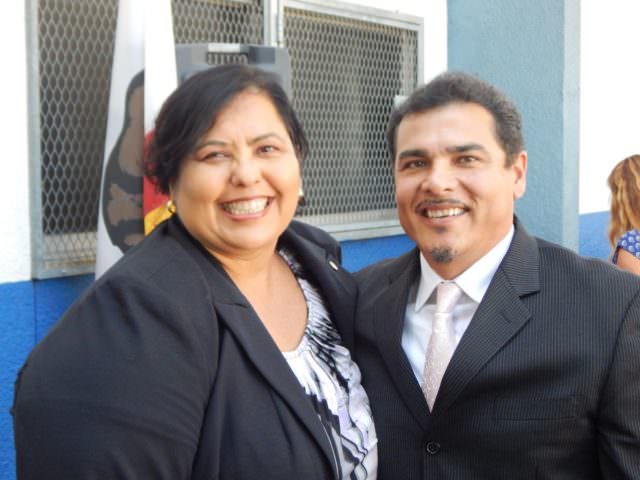 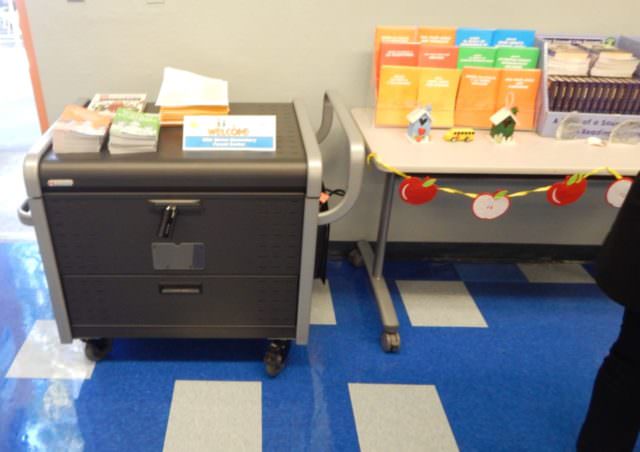 Chromebooks in the parent center 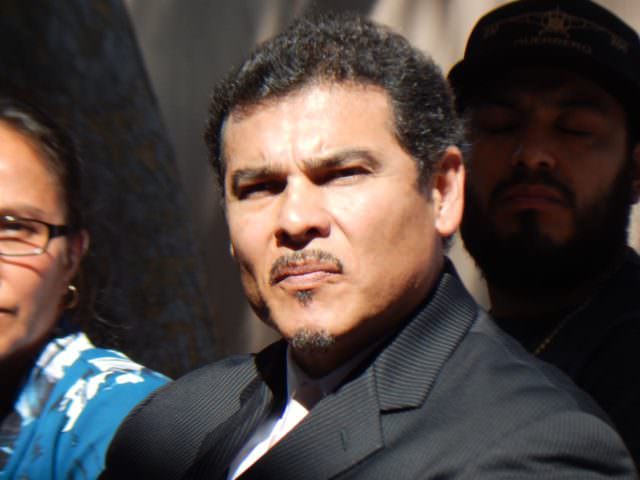 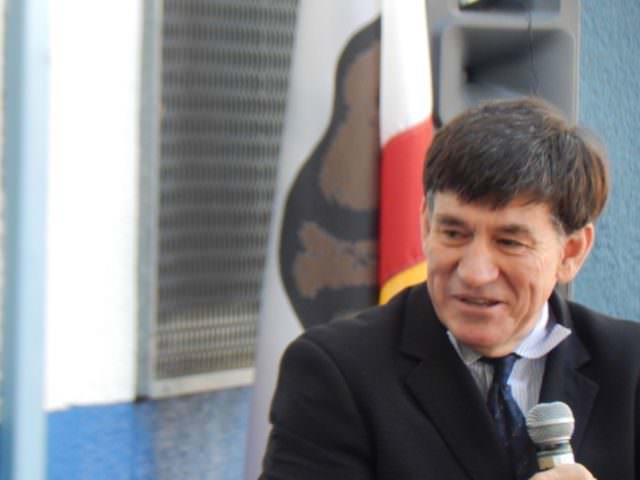 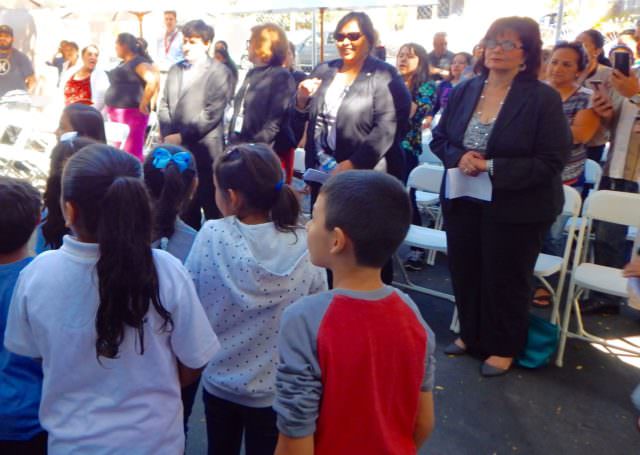 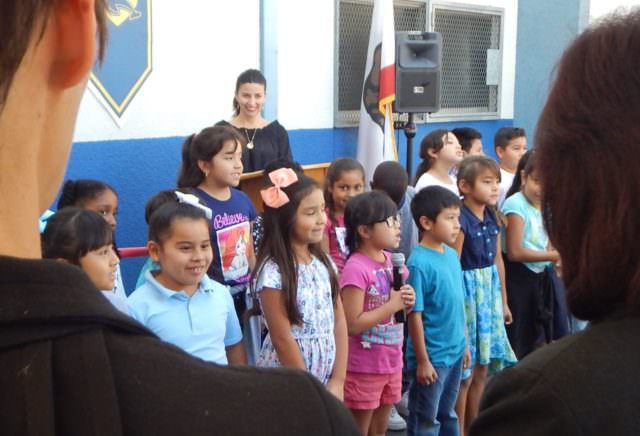 Samantha Gonzalez and Allyson Carrera lead the Pledge of Allegiance 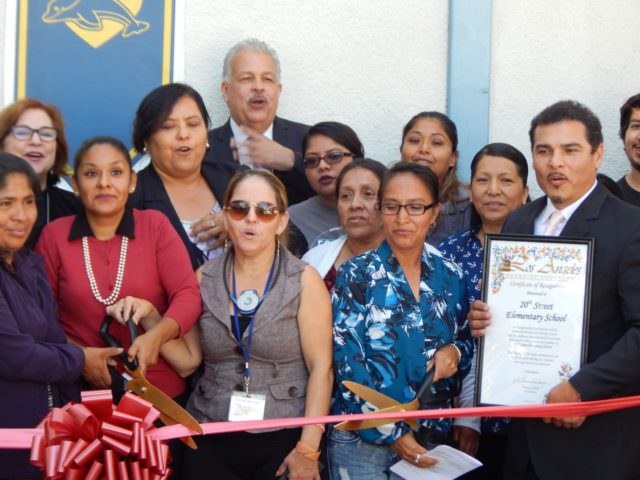 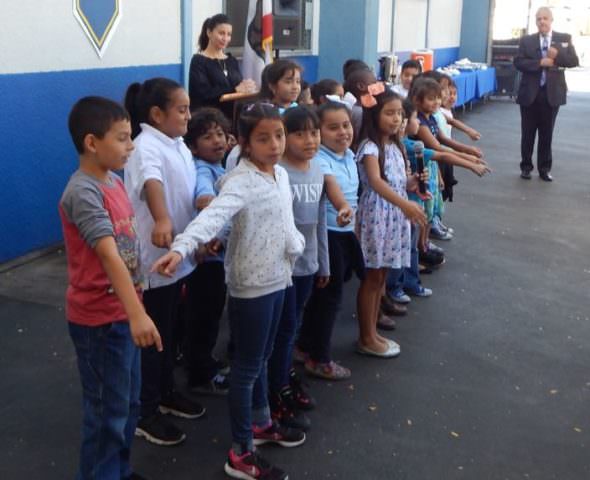 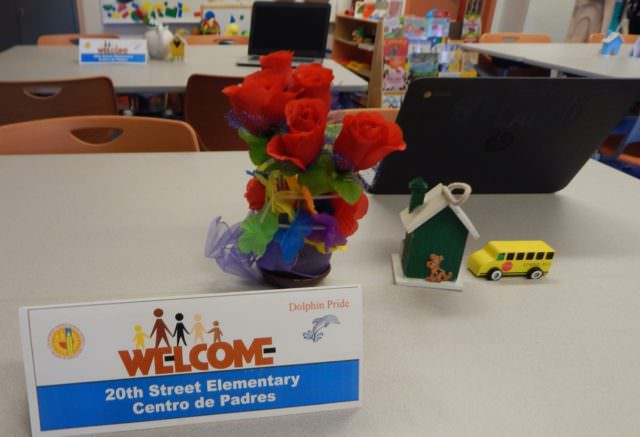 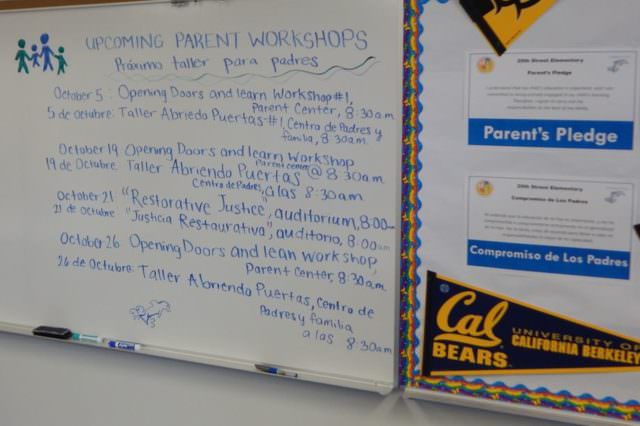 Parent center notes on the board 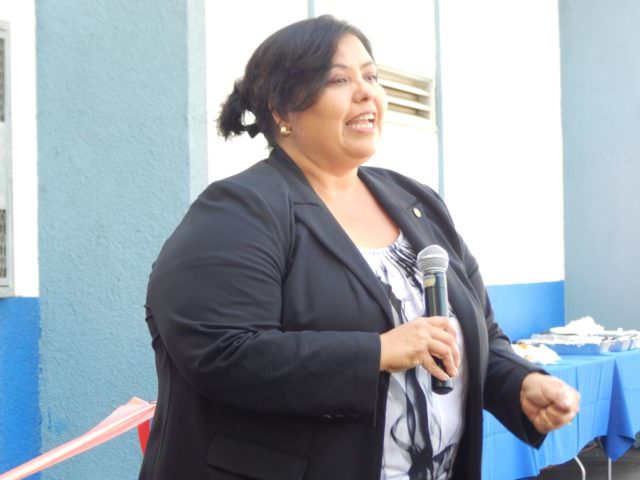 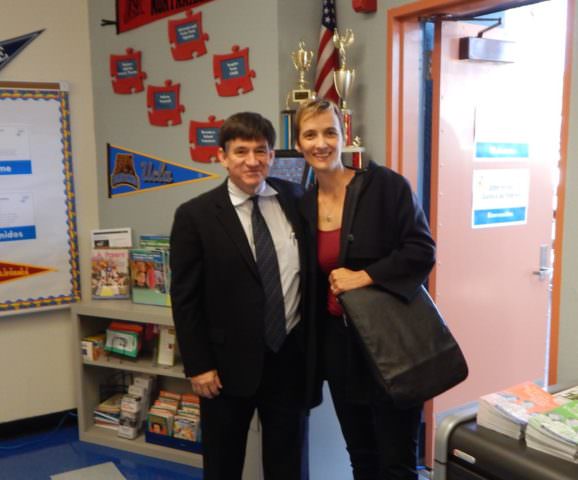 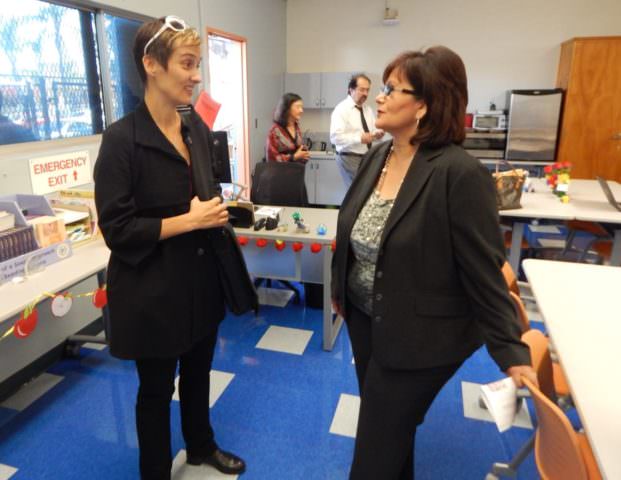 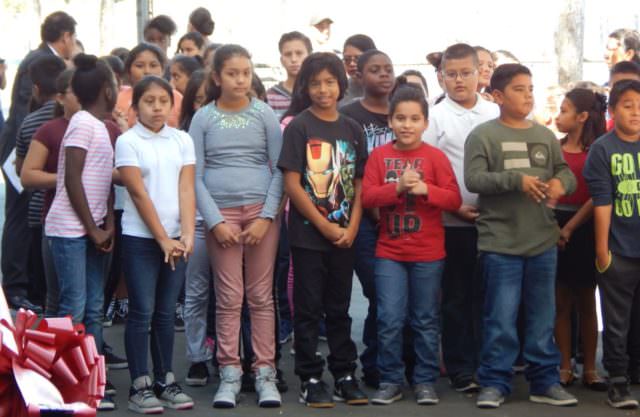 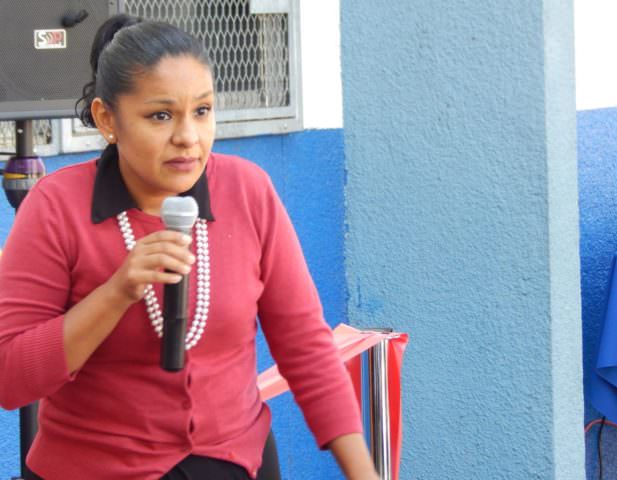 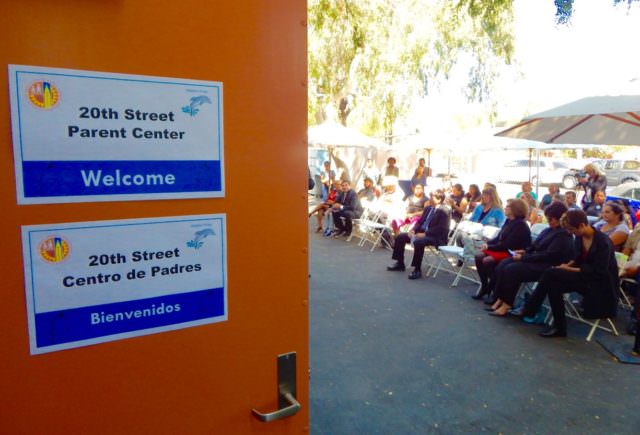 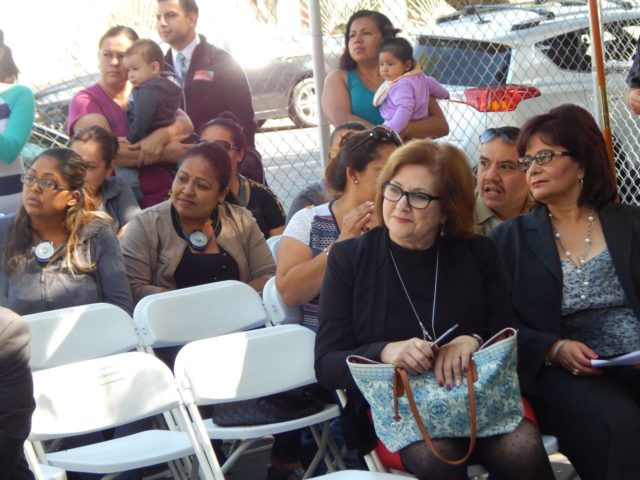 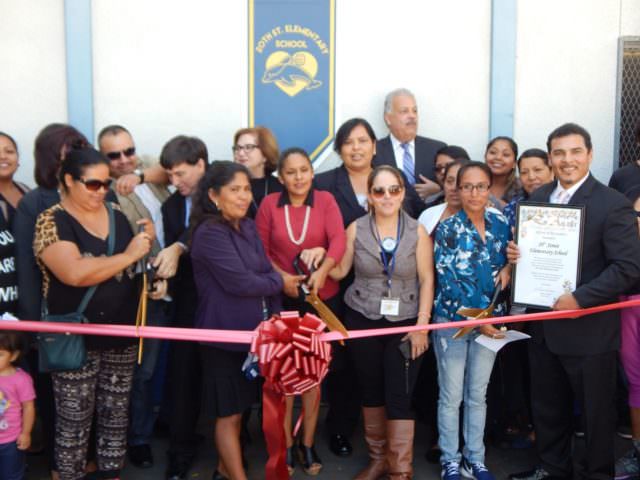 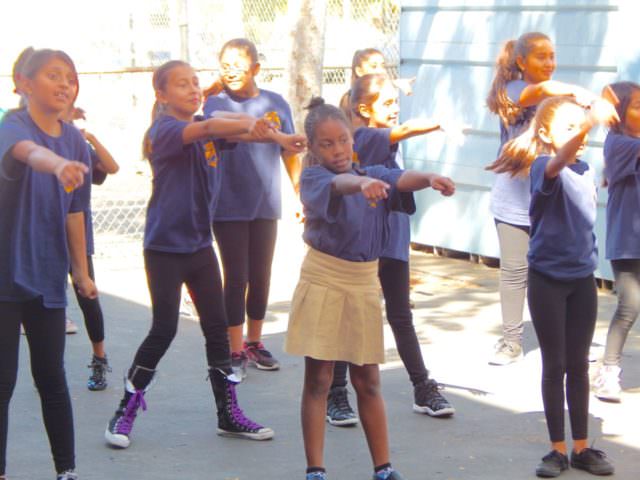 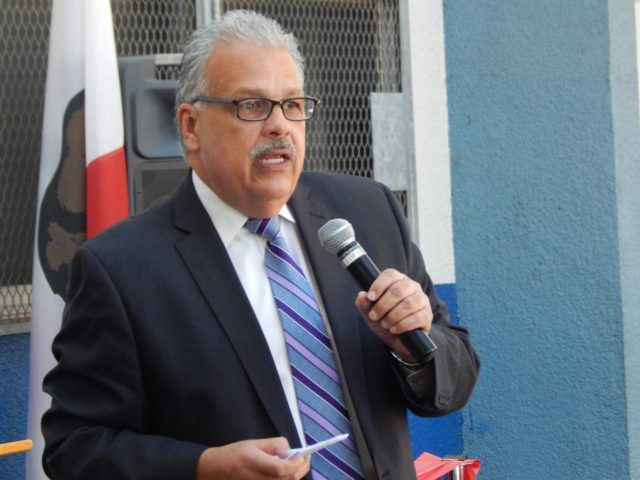 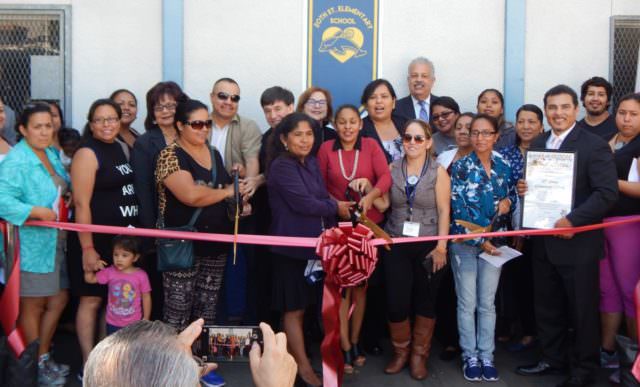 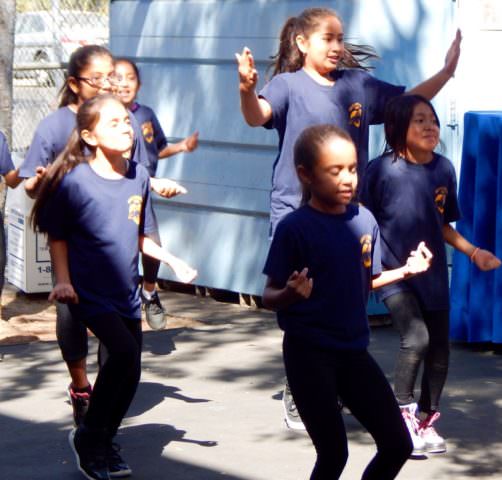 One of the most popular classes at 20th Street Elementary School has 43 dedicated students who come twice a week.

The parents of this 600-student school just south of downtown Los Angeles come here to learn English. They do projects for teachers. They discuss school issues. Their children even help them with their English homework. And it’s all taking place at one of the most active rooms on campus: the parent center.

LA Unified officials, board member Monica Garcia and about 50 parents gathered Tuesday to dedicate the new parent center with a ribbon-cutting ceremony and student performances. The ceremony also marked a healing of sorts among divided parents who had twice moved to use a “parent trigger,” a California law that allows parents to take over a failing school.

Nearly half of the school sites — more than 500 — at the nation’s second-largest school district have at least one classroom dedicated specifically as a parent center. Many of them have computers, Internet, desks, materials, copy machines and other supports for parents to use during and after school and sometimes on weekends.

This year alone, 70 parent centers opened at district schools and 40 more will open before the end of December, said Rowena Lagrosa, senior executive director of parent, community and student services. The district has a request before the school board for 155 more centers.

“These centers are a game changer, and it results directly in improved classroom attendance,” Lagrosa said. “Getting our parents involved with the school is integral to getting our children college-bound, and as we see here, it starts at the elementary level.”

The costs per school for a new parent center run from $65,000 to $100,000, according to Lagrosa, who added, “Some of our schools need a little more TLC.” The district provides a cart with 20 Chromebooks, like those already provided to schools for testing.

“This is a great space for parents to come together and work together now,” said Karla Vilchis, who is on the English Language Advisory and School Site councils. She recalled the contentious years when parents tried to take control of the school. “Everyone has the desire to get the best education for our children.”

The school’s principal, Mario Garcielita, welcomed the parent center and acknowledged the difficult period with different factions of parents. For the past year, parents met at nearby homes to figure out how to force improvements at the school. Now they can meet on campus to voice their issues and talk among themselves.

“This was a tough year this last year, and I respect that past and the issues that came up, but I’m so excited about the future,” Garcielita said. “Parents are now coming together and sharing their vision for the school. This is a great new beginning.”

In June, the parents, teachers and the district agreed to move 20th Street into the Partnership for Los Angeles Schools, which now operates 19 schools in South LA, Boyle Heights and Watts. With Partnership, the school remains under district control but is granted more educational autonomy. It also benefits from the nonprofit organization’s many community connections and resources. Partnership CEO Joan Sullivan attended Tuesday’s dedication and pointed out the importance of parent centers.

“Investing in adults, who are the primary teachers of our children, is a centerpiece of what Partnership believes,” Sullivan said. “Equal access to quality education is the biggest civil rights battle going on, and it’s more important than the suffragette movement or integration or abolition, and the movement will look to parents to lead the way.”

Although the parent center was in the planning stages before Partnership came on the scene, Sullivan said they have helped with equipment and supplies for the center.

“Sometimes parent centers are second thoughts and put off in the corner of the school somewhere,” Sullivan said. “But these are important spaces where parents come together and feel empowered. They learn together and strategize. It is a space where parents can raise their voices and realize they are true partners in the education of their children.”

This is the best way to start turning around the school, said Central District Administrator of Operations Eugene L. Hernandez. “This is the beginning of turning this into a top-notch school,” he said. “Parents need to be engaged.”

Annabella Sales, the community representative hired to work with the 20th Street parent center, said, “Most of the parents who come in are not familiar with technology and they do not have computers or Internet at home. They come here and they learn not only how to help their children with their homework, but the children help them too.”

Parents also learn how to navigate getting financial help and looking ahead to college enrollment for their children. “It is a great team effort for everyone involved in education,” said Lorena Padilla-Melendez, director of community relations for the district’s Facilities Services Division. “It shows we are all part of the team.”

Mark Hovatter, chief facilities executive for the district, said, “I am a parent and I love the parent center projects because it costs a small amount of money and we do something that is so critical for the schools.”

Board member Garcia chatted in Spanish with parents and children after the second-graders recited the poem “I, Too, Sing America” and sang “This Little Light of Mine.” Then the school drill team performed.

“This parent center represents power and love and hope and shows something great for the future of these talented children,” Garcia said. “This is your classroom, parents, and if you have doubts and concerns, you can come here to discuss. Everything you need is available here. We will work together for your children.”

As parent Vilchis pointed out, parent involvement could be as simple as helping a teacher cut out shapes or sweep the classrooms.

“There’s a lot of cutting and sweeping to do,” Vilchis said. “There’s enough to do to feel proud and happy and making the world a better place for our children.”