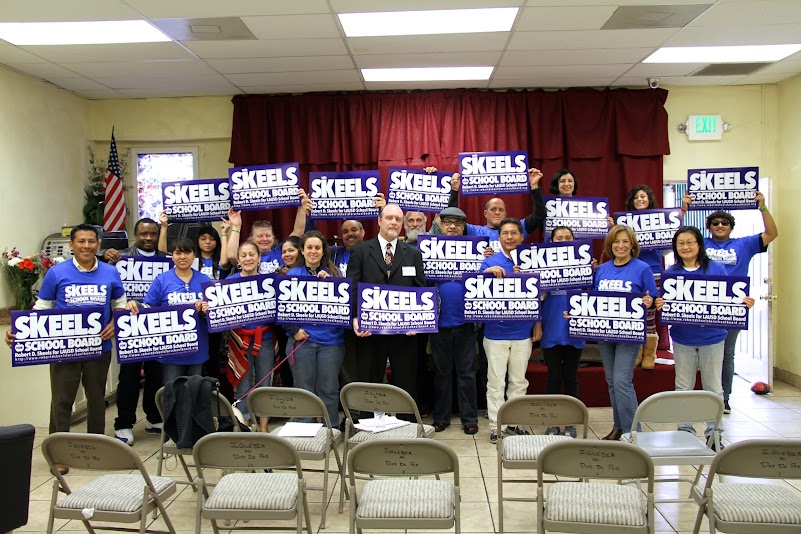 There is, arguably, just one School Board candidate running a truly grassroots campaign built on dozens of volunteers and more than a hundred* small contributions of as little as $5 — and little else by way of outside support.

His name is Robert Skeels.

Skeels is one of several candidates running for the Eastside District 2 spot on the LAUSD School Board, and he will face off against some of his opponents at Monday’s debate LA-32 Neighborhood Council forum.

He has been endorsed by the United Teachers of Los Angeles along with two other challengers — a UTLA decision Skeels dismisses in typically blunt terms.

“We already know what we’re against,” said Skeels in a recent telephone interview. “Let’s say what we’re for.”

Skeels is a longtime education writer and activist, having organized and lobbied against cuts to adult education last year. He and his supporters blame those cuts on his opponent, School Board President Monica Garcia.

Skeels says that on Saturdays he has 20 to 25 people walking precincts and as many as 50 people phone-banking from the comfort of their own home — something made possible only in the last ten years or so thanks to new technology.

So many of Skeels’ campaign donors are classroom teachers it raises the issue of why UTLA is splitting its endorsement amongst Skeels, Annamarie Montanez and Abelardo Diaz.

According to insiders, the multiple endorsements are either a sign of internal dissent within UTLA or a strategy that focuses on taking down School Board President Monica Garcia (see: UTLA Focus: Defend Zimmer, Defeat Garcia).

According to Skeels, the multiple endorsements by UTLA are a questionable decision.

“It doesn’t look like a winning strategy,” said Skeels. “There’s almost this anyone-but-Monica feel to it.”

As may be obvious, Skeels is a firebrand, blasting charter schools as the “privatization of education” and referring to United Way and other non-profits who’ve been partial to “school reform” as “the non-profit industrial complex.”

While he is scheduled to attend the Monday candidate forum for District 2, Skeels says he will probably miss the United Way candidates forum on Wednesday.

*Note: A previous version of this post said thousand.