LA Unified is opening its first all-boys school next week, but so far only half the number of hoped-for students have enrolled.

The Boys Academic Leadership Academy is starting with sixth- and seventh-grades, offering 100 spots for each grade. Eventually, the South LA school is approved to go through high school, opening a new grade each year, for a capacity of 700 young men.

But as of Thursday, the academy had signed up only 100 boys. The last orientation before school begins was Thursday evening at the school, to encourage last-minute sign-ups. The slow enrollment is a disappointment, but not unexpected.

“Parents don’t quite have an understanding about this new option in their community,” said the school’s principal, Don Moorer. “This school is very different from what has traditionally been offered. It’s not a charter and it’s not a magnet, and people are fed up with those other systems, so they are skeptical.”

Enrollment has increased steadily; it’s now triple what it was three weeks ago. Five to 10 students come in every day.

“I’m pretty confident that we will have 140 students by the time we open on Day One, and more will come in at the last minute,” Moorer said. “When people see what we’re doing here, they get excited.”

Moorer said the new school is modeled after the Eagle Academies in New York, single-gender public schools in crime-ridden neighborhoods. Like at those schools, students at the Boys Academy dress in uniforms with ties.

Moorer said his students will learn to compete with each other and are divided into “houses” named after minority heroes: boxer Muhammad Ali, writer James Baldwin, astrophysicist Neil deGrasse Tyson, and revolutionary Che Guevara.

“The boys will study and write papers about each one of these men and compete with each other, and their house will win a student-sized trophy at the end of the year,” Moorer said. “They are to show good character, respect, integrity, courage, and humility and earn merit points for their house.”

Moorer said he wasn’t aware of how the house team structure sounded similar to Hogwarts in the “Harry Potter” novels, which has houses with names like Gryffindor and Slytherin. “I’ve not read the Harry Potter books,” he said.

Over the summer, Moorer and some of the new students met for a few weeks to get them prepared for the new school. They did trust exercises like leading each other blindfolded through the school and tying themselves in a human knot and then unraveling themselves.

“These boys became immediate brothers,” Moorer said. “Now we just have to get the word out. Marketing is not an easy thing for a school.” 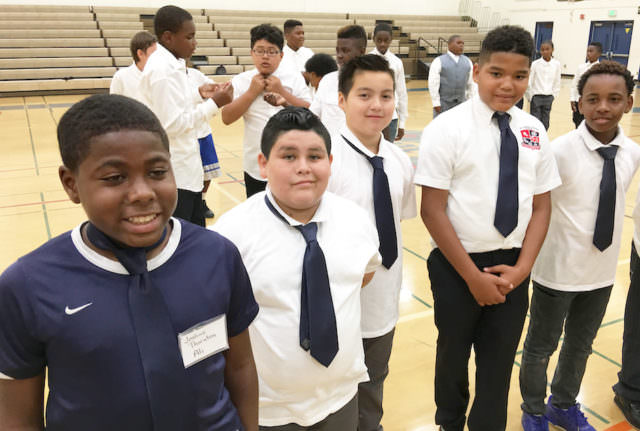 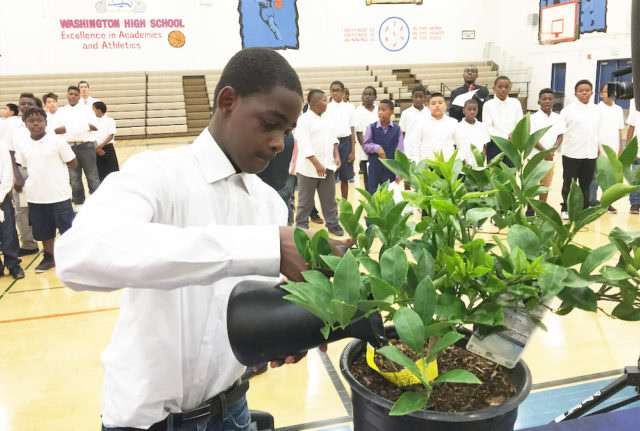 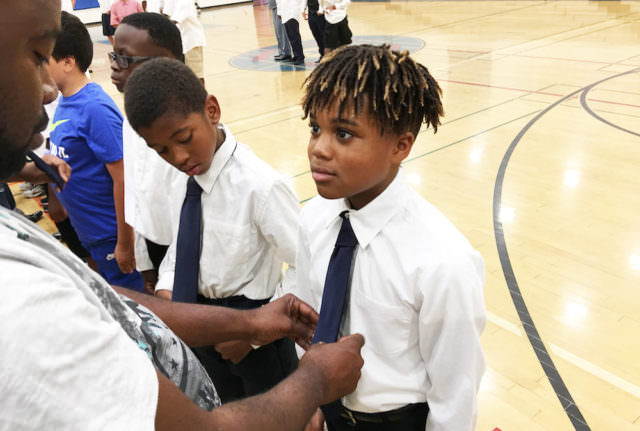 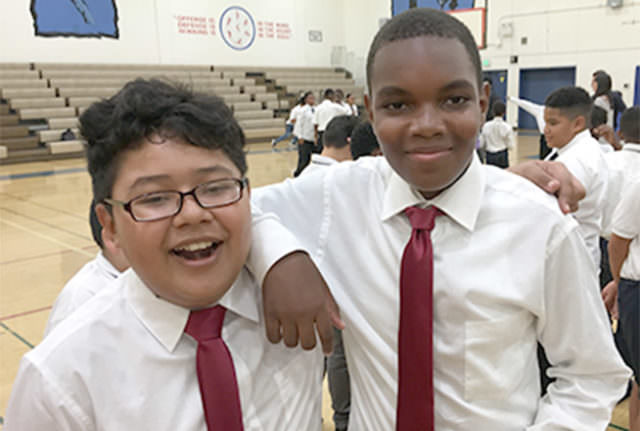 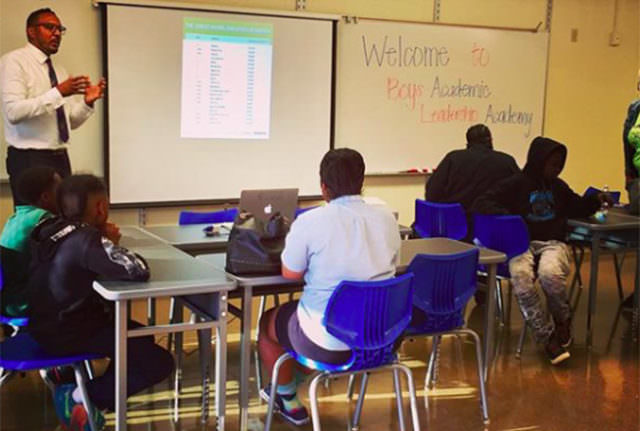 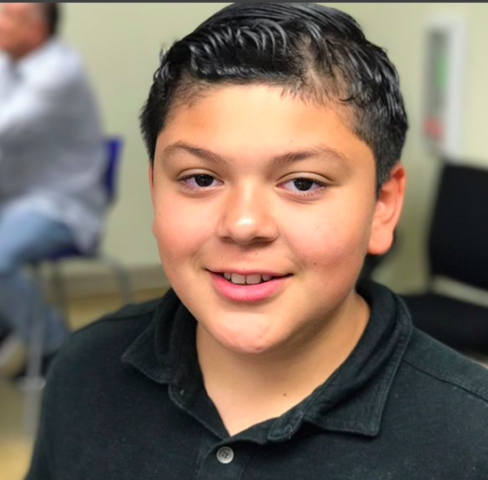 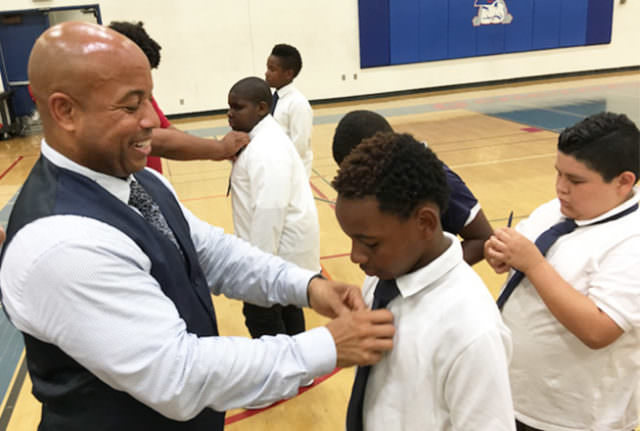 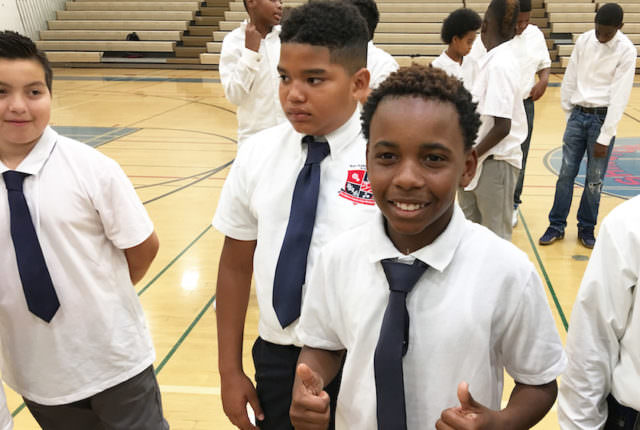 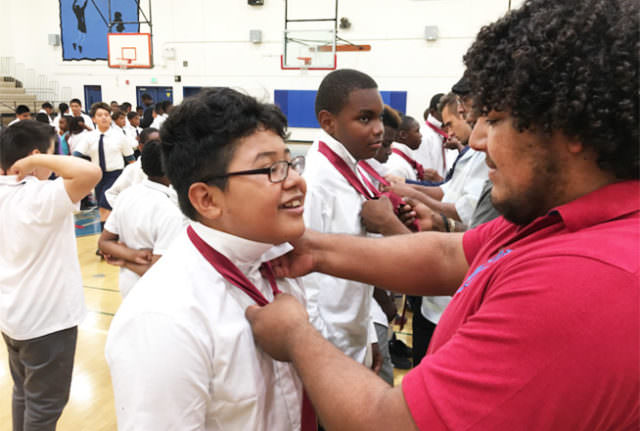 A parent volunteer helps at the closing ceremony. (Courtesy LAUSD) 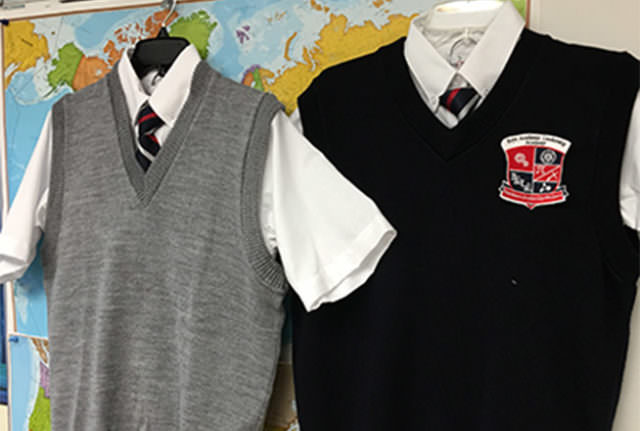 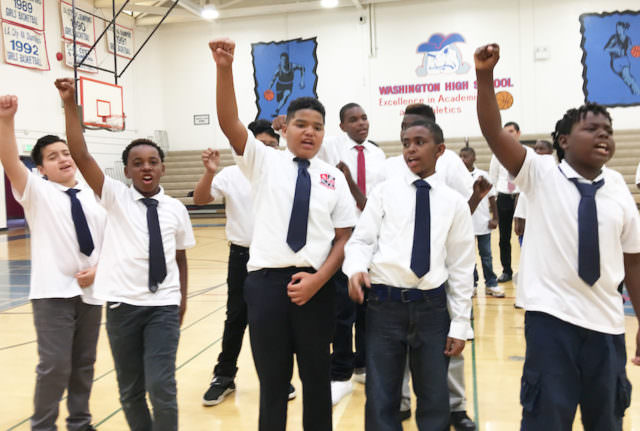 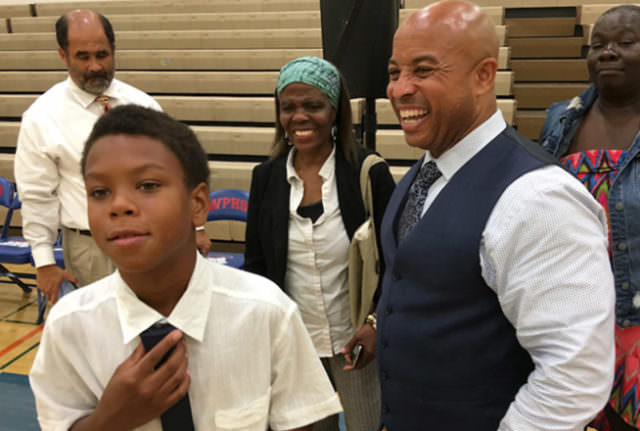 Moorer said he has gone out to the community in the area where the school is being co-located at Washington Preparatory High School in the Westmont section of Los Angeles.

“I continue to beat the streets and go door-to-door and talk to parents and local businesses,” Moorer said. “Some people don’t like the neighborhood, some are concerned about the location, but the school is open to everyone, and it is free. This is a school with the kind of education that some of these parents would have to drive 30 miles away to get to and pay $30,000.”

The school is located in an area frequented by gangs, and it’s on the campus of the school where board member George McKenna taught and served as principal, and whose success was made into a movie starring Denzel Washington. McKenna is disappointed in the boys’ school enrollment numbers so far too.

• More from LA School Report: A movie, a principal, and a turnaround school: 30 years since ‘The George McKenna Story’

“There were surveys and parents saying they wanted a school for boys like this, but people are afraid of something different,” McKenna said. “It made sense that if we opened an all-girls school, then we’ll have an all-boys school too. I expect that when the grades expand into the high school years and there are sports teams and more activities, then more students will join.”

The Boys Academy plans to have the traditional high school sports like basketball and football, but also golf, tennis, and lacrosse. There will be regular yoga breaks and opportunities to study tai chi and other martial arts to learn focus and relaxation.

The board last year approved nearly $700,000 to upgrade classrooms for the Boys Academy, reflecting a trend of public schools experimenting with same-gender classrooms. The Young Oak Kim Academy in Los Angeles has separate boys-only and girls-only classes in middle school, but this is the first all-boys school.

“I went to an all-male high school, and it was in the segregated South at the time,” McKenna said. “I benefitted tremendously from the experience, and I think these boys will too, if they hear about it and find out what it’s all about.”

Superintendent Michelle King noted that this is another choice for parents of LA Unified to remain in the district and said, “These young men will develop high-level skills that will open doors of colleges and careers.”

Moorer, who came from View Park Continuation School, about eight miles away from his new school, said he will be coordinating with nearby Los Angeles Southwest College so his students can earn Associate Arts degrees while they are in high school.

“I want them to be dually enrolled and start earning a college degree while they’re in high school,” Moorer said. “It’s all about looking forward to the future, and what can be ahead, and that’s what gets the parents excited.”

On the first day of school next Tuesday, the entire school will visit USC to tour the campus. “On their first day here, I want to show them where they can eventually end up,” Moorer said.

Another selling point is the school’s STEAM focus — science, technology, engineering, arts, and math. He said the arts are especially interesting to some of the boys. “These young men like music, and I saw many of their eyes light up when they heard about that,” Moorer said. “Their parents’ eyes light up when they hear how we are emphasizing them all going to college.”

The school is not a military academy, nor is it a place for problem youth, but Moorer said people’s misperceptions are contributing to the enrollment challenges. Although most of those signed up so far are African-American, boys from all ethnicities have shown interest, he said. The school is open to all boys in the LA Unified school district.

“They are not distracted by young ladies. Before they come in, some of the boys don’t like that, but once they arrive and see what it’s all about, they are excited about not having girls as a distraction.”

Every day at the Boys Academy will start off with a town hall as Moorer presents a positive message for the day and students all give thanks for something. He then will read the late-1800s poem “Invictus” by William Ernest Henley, about resilience and how the students are the master of their fate and captain of their souls, Moorer said.

The school is also providing mentoring with role models from community groups such as Phi Beta Sigma who will work one-on-one with the students.

*This article has been updated to correct that the principal’s former school, View Park Continuation School, is not five blocks away and is not an independent charter school.