Student survey: 1 in 4 high school seniors had their post-graduation plans changed by the pandemic

COVID-19 is changing what students plan to do after high school, with those more affected by the pandemic more likely to have altered their post-graduation expectations, a new student survey reveals.

One in four high school seniors said their postsecondary plans had changed since the start of the pandemic, an increase from 18 percent of seniors during a previous survey in spring 2020. Thirty percent of non-white students said their plans had changed, compared to 18 percent of white students, according to the survey conducted in fall 2020 by the nonprofit YouthTruth. Those who said they were personally affected by the pandemic and who report receiving free and reduced-price lunch were more likely to report alerting their plans when compared to their peers.

The share of students surveyed who said they plan to attend a four-year college or university was 51 percent, which is about the same as in pre-pandemic YouthTruth surveys. However, bigger gaps emerge for other options. The latest results show a significant decline in students expecting to attend a two-year college, 16 percent, compared to 22 percent before COVID-19. The share of students who are unsure about their plans after high school graduation also increased, and there was a slight rise in those expecting to work full time.

Other data back up the YouthTruth findings. Completion of the federal financial aid application — which is correlated to college enrollment — is down more than 9 percent compared to this time last year, according to a tracker maintained by the National College Attainment Network. Meanwhile, enrollment for low-income high school students declined by nearly 30 percent in fall 2020, the National Student Clearinghouse Research Center reports.

Mental health is also a challenge. Students reported feeling depressed, stressed or anxious as the top obstacle to learning, with 46 percent of students saying it’s affecting them.

The findings on mental health and changing postsecondary plans are “heartbreaking but maybe not surprising” given what’s already known about how the pandemic is affecting kids, said Jen Wilka, YouthTruth’s executive director.

“Not all students are experiencing this time equally, and students are going to need different kinds of supports now and in the coming months and year,” she added. 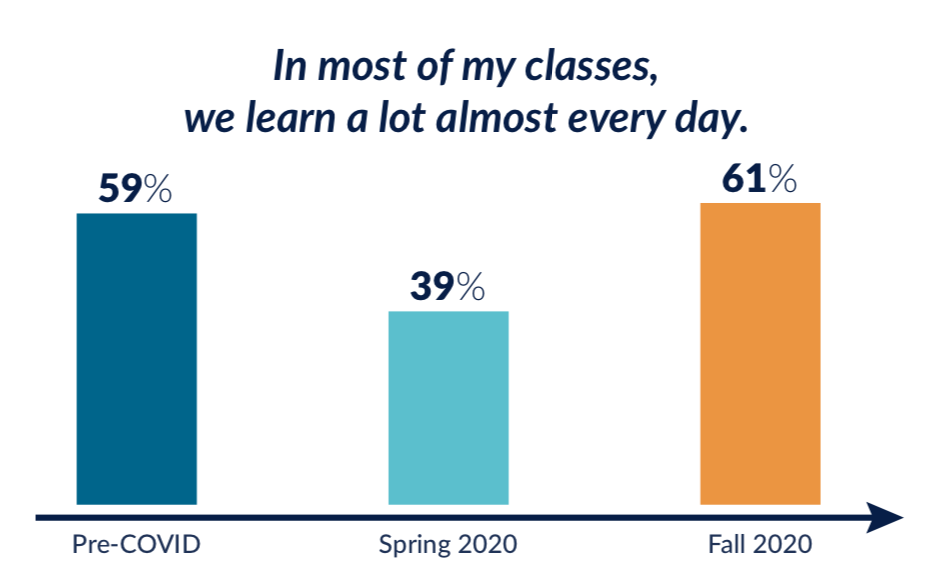 YouthTruth surveyed about 85,000 students in grades 3 through 12 from 14 states in the fall and used previous results to compare responses. The survey was conducted online in English and Spanish.

The report revealed some bright spots, too. While just 39 percent of students said they were learning “a lot almost every day” in the spring, 61 percent now say that is the case, slightly more than before the pandemic. Students who earn high grades are more likely to say they’re learning a lot, and slightly more students learning in person agreed with the statement, compared to those who are in remote and hybrid environments. Of note, hybrid ranked last, behind in-person and fully remote, in the percentage of students reporting they were learning a lot.

Additionally, students’ sense of belonging in their schools has rebounded, with 49 percent saying they “feel like part of [their] school’s community,” compared to 30 percent last spring and 43 percent pre-pandemic. 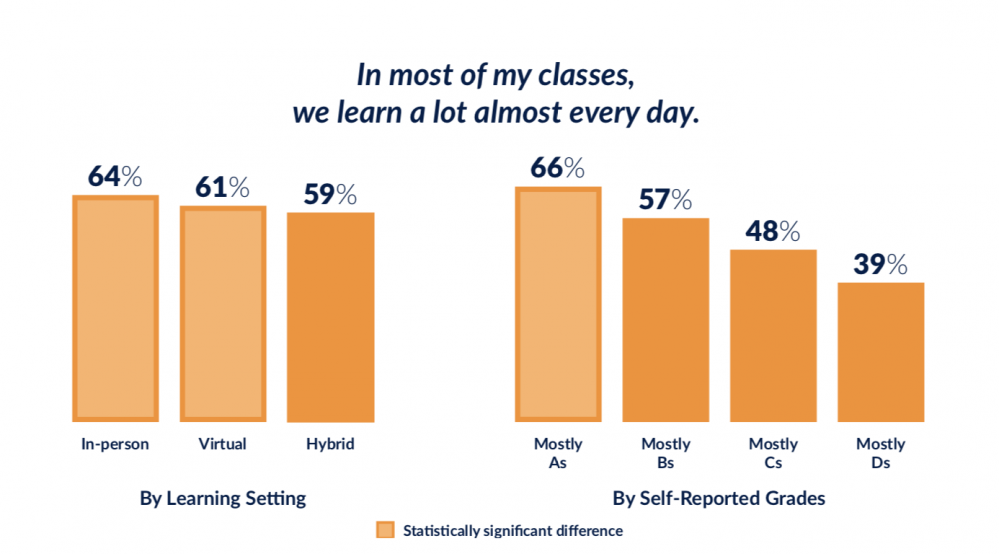 Some other findings from the most recent YouthTruth report: