Students rally to get first gender-neutral restroom in LAUSD

Santee students rally for the restroom. (Photo by Jose Lara)

Yep, it’s just a toilet. That’s what the students are saying at Santee Education Complex where today they’ve become the first LA Unified school to have a gender-neutral restroom.

The issue has become controversial throughout the country, with some states passing laws restricting transgendered people’s restroom use and boycotts being waged against certain cities and states.

The idea sprang up from the students in the on-campus Gay-Straight Alliance. They used social media and clever grassroots marketing to collect more than 700 signatures. The student-led campaign “It’s Just a Toilet” got them their newly designated restroom within a month.

“Once we start talking about the issue, most students understand and want to support it,” said Kween, one of the students who kicked off the project and who wrote about it in the Los Angeles Times’s High School Insider. “We hope this will start a toilet revolution in all the schools everywhere.”

“Sustainable change comes from the ground up,” said Joan Sullivan, CEO of the Partnership for Los Angeles Schools, a non-profit that runs 17 LA schools, including Santee. She added that the students’ accomplishment was less about the bathroom and “more about students exercising their leadership.”

The second-floor women’s bathroom will have its sign taken down and have a gender-neutral sign instead. It is centrally located on the campus with 15 stalls. It will be highly supervised and open only during passing periods. The 1,800 students at Santee will still have access to other gender-specific bathrooms on campus.

The students who launched the idea also created a safety plan and a power-point presentation that they gave to administrators, parents, classrooms and the community. They also created community posters and a media campaign.

The Santee community believes it’s the first public school gender-neutral bathroom in California. Some colleges and universities are trying it, and the White House recently opened its first gender-neutral restrooms. Some of the biggest cities in the nation including Philadelphia, Seattle and Austin, as well as West Hollywood, have followed suit. The students reacted to some of the national discussion about the issue.

“It engages their civic leadership,” said Martin Gomez, who has been Santee’s principal for four years and whose education began in LA Unified schools. 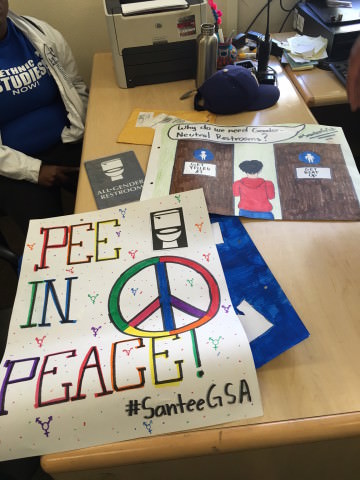 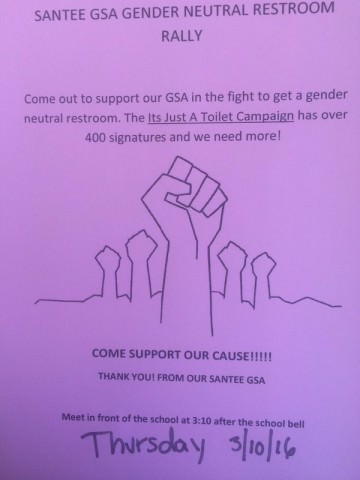 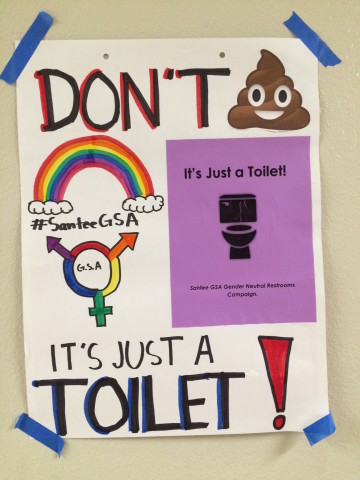 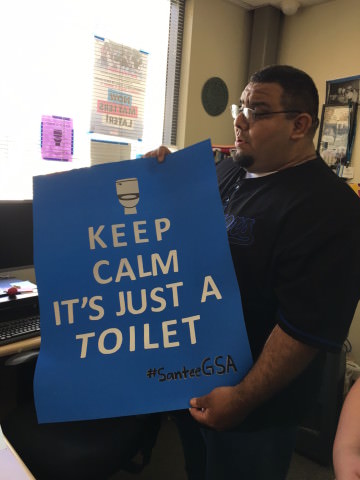 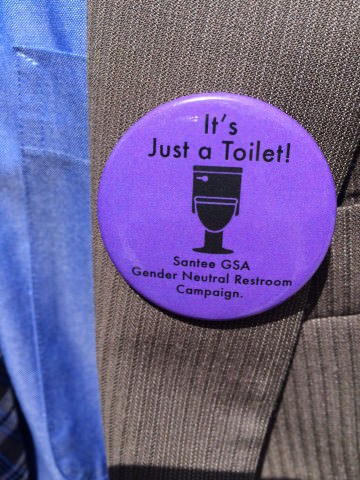 “Our students who advocated for the gender-neutral restrooms are the real heroes. This valuable experience allowed them to develop leadership skills that will prepare them for college and career,” Gomez added in a statement. “With this move, Santee and the Partnership are staying true to their mission of providing all students with a safe and welcoming environment, and embracing the needs of students of all genders and backgrounds. We believe that when you support students socio-emotionally, you can better prepare them to achieve academically.”

Jose Lara, who is the advisor for Santee’s Gay-Straight Alliance, said, “This has gone way beyond just embracing students of all genders; it’s about making all students feel comfortable in the school environment.”

Lara noted that the students held demonstrations, rallies and created their own slogans. “By pushing forward this initiative, the school and our leaders are showing students a safe, supportive and caring environment where all students—regardless of their gender identification—can focus on learning and participating in everyday activities as their true selves,” he added.

Sullivan added, “One of the Partnership’s fundamental beliefs is that sustainable change comes from the stakeholders in our schools, and that’s a model that is essential to everything we do. This successful campaign is the perfect manifestation of advocacy and student voice being used for the betterment of public schools, and in the interest of equity and fairness.”

Student Johnny Ramos joined in the Twitter campaign and wrote, “I’m so proud to be a part of this huge movement. Getting this gender-neutral restroom has been amazing.”