‘Tell everyone about us’: LAUSD’s first all-boys school kicks off with high energy and aspirations

Principal Don Moorer leads students at the new Boys Academy as they conduct their daily libations.

Toward the end of the first day of wrangling 100 boys in LA Unified’s first all-boys school, Principal Don Moorer sighed, “They certainly have a lot of energy.”

He took the entire school of sixth- and seventh-graders to USC on Tuesday morning to tour the campus and show them a university they might someday attend. Many of them asked questions about what kind of grades they would need to get into the school, and what the best path was for them to get there.

“They were already seeing the options of getting into a university like that, and that’s what we wanted to show them on their first day,” Moorer said. “It had a great effect on some of them.”

And then, in the final hour of their day, dignitaries came to their school: Superintendent Michelle King, state Sen. Steve Bradford, Local District West Superintendent Cheryl Hildreth, LAUSD Police Chief Steve Zipperman, and four school board members. The boys were naturally antsy, and they kidded, talked, and played around while lining up and listening to the speeches.

“Now pay attention,” scolded George McKenna, the board member for the district where the school is located, on the campus of Washington Prep High School in South Los Angeles. “I used to be the principal of the school right behind us, if you don’t know who I am, ask somebody, they’ll tell you.”

When the boys were told that multi-Oscar winner Denzel Washington once portrayed McKenna in a movie, and they quieted down.

• More from LA School Report: A movie, a principal, and a turnaround school: 30 years since ‘The George McKenna Story’

“You are here because we had a dream and vision for a school like this,” McKenna said. “We are committed to you, and we will not let you stray.”

Superintendent King thanked the parents for bringing their children to the district school, which is another of the new alternatives the school district has come up with to be more attractive to local communities.

“This is one of the few schools of this kind in the whole state, and I am grateful that you took a chance on us,” King said.

The Boys Academic Leadership Academy is at half its potential enrollment capacity at the moment, but the principal said he may have more students in the next few weeks, which could require them to expand their staff of five teachers. The office of the Boys Academy is in buildings that are offset from the main campus of Washington Prep. The office has banners of universities across the country to keep the next step of education always in the minds of the students. 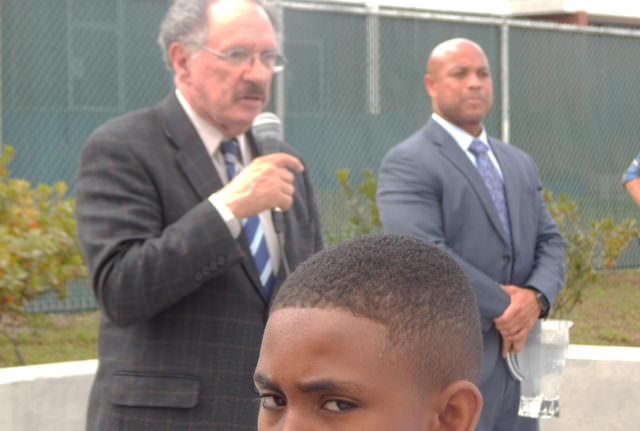 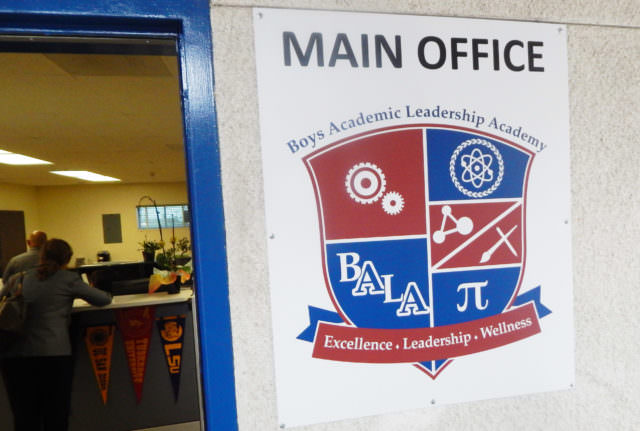 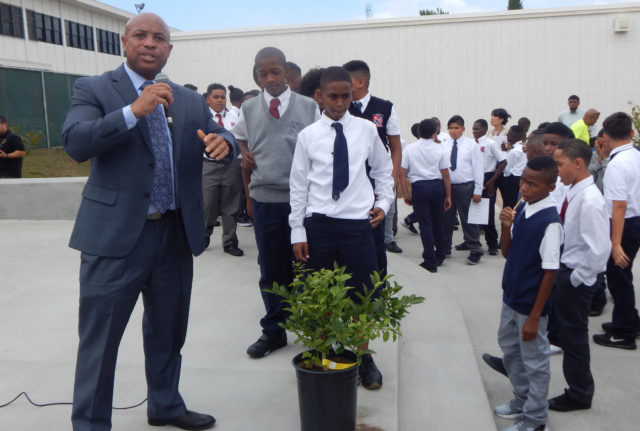 Principal Moorer conducts the daily libations around the lemon tree. 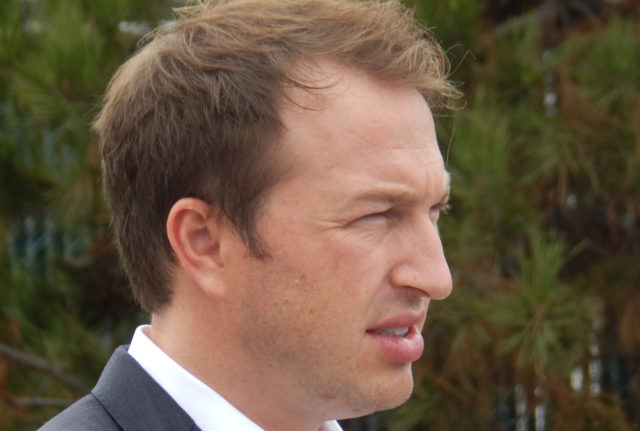 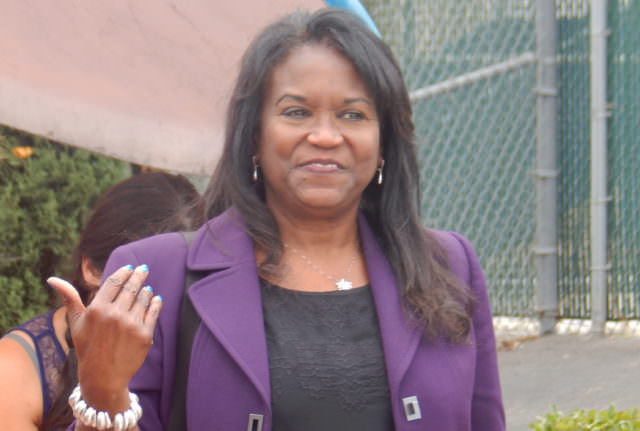 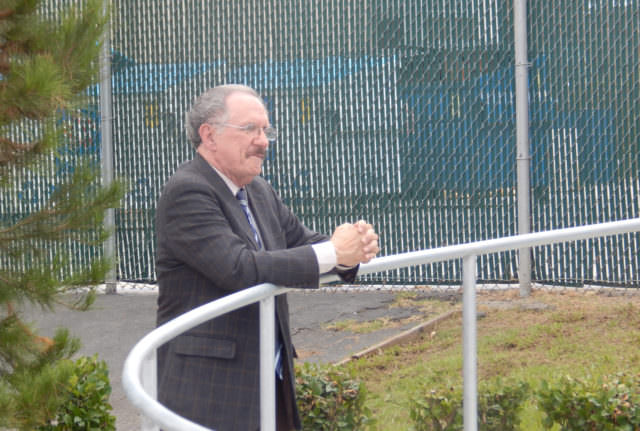 Board member George McKenna observes from the side. 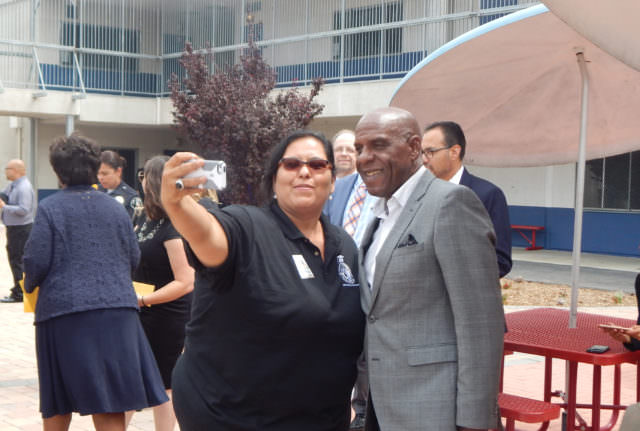 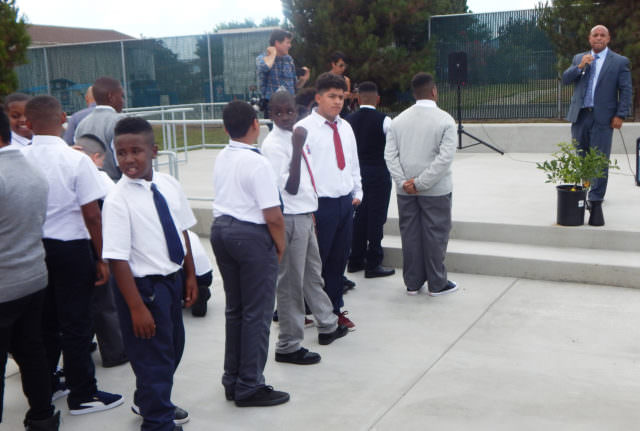 Students lining up for the Town Hall. 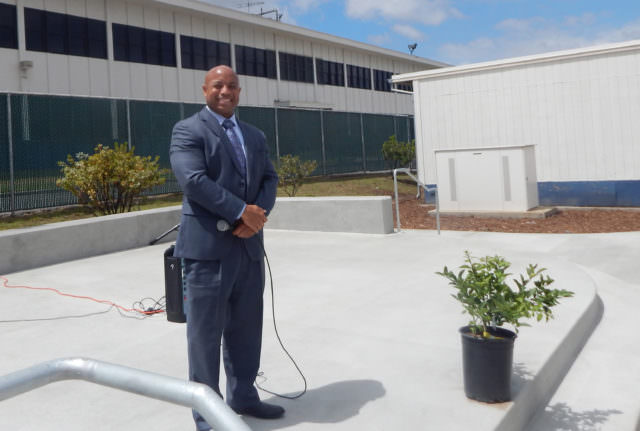 Principal Moorer with the lemon tree. 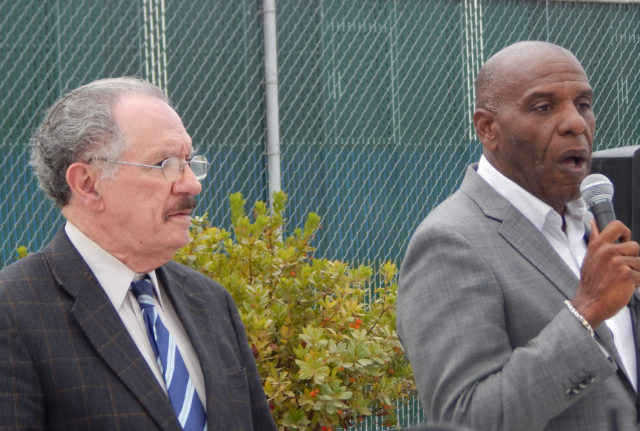 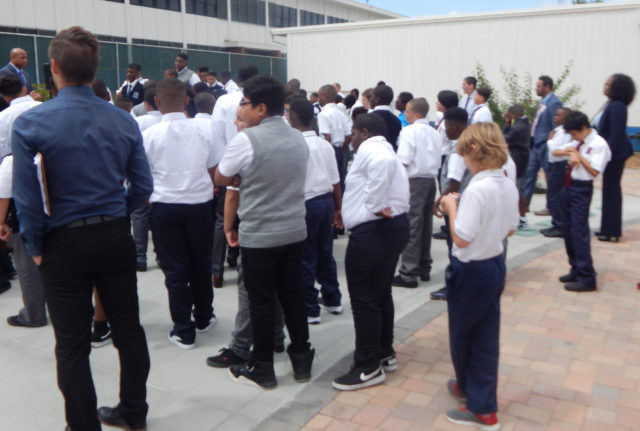 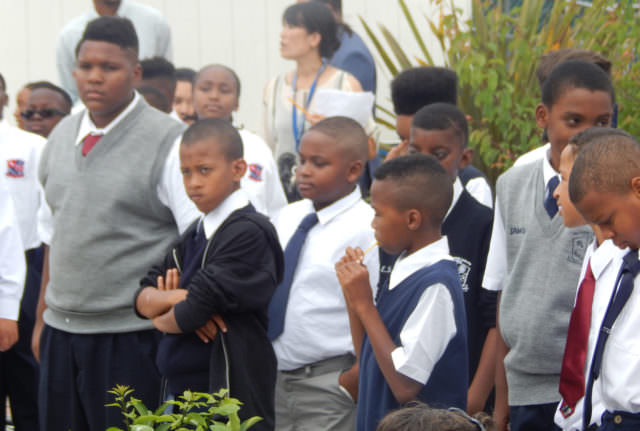 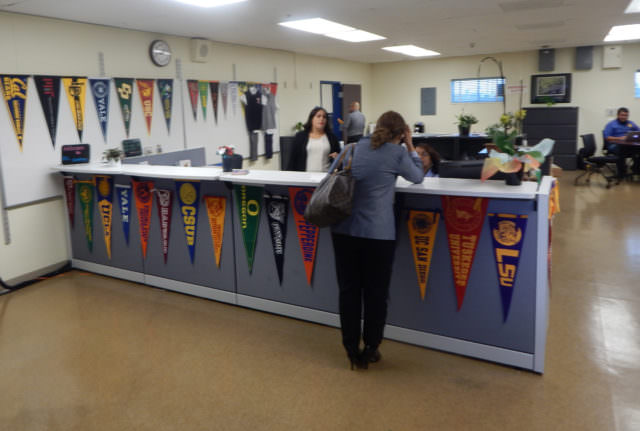 The office of the Boys Academy is lined with college banners. 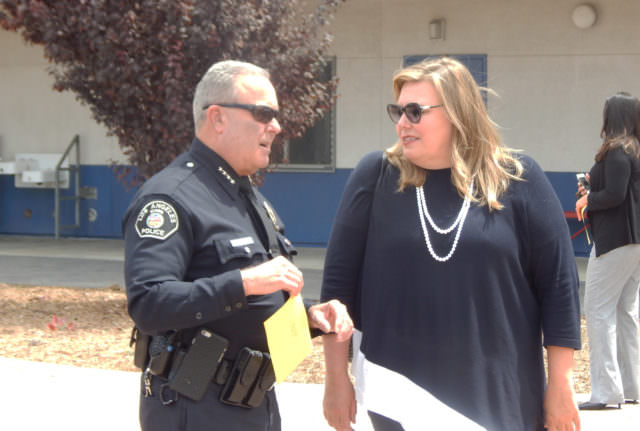 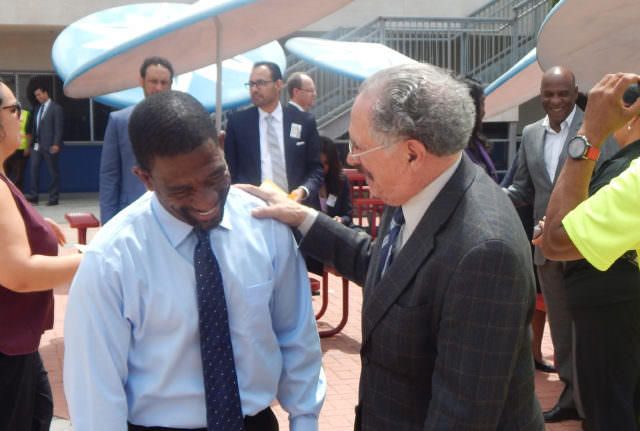 George McKenna talks to one of the new teachers. 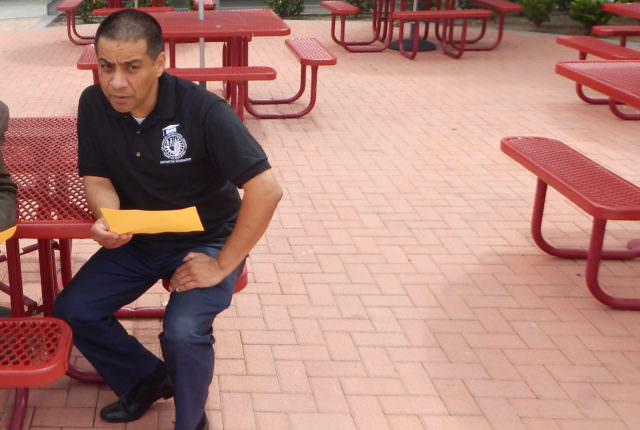 Board president Ref Rodriguez watches from the sidelines. 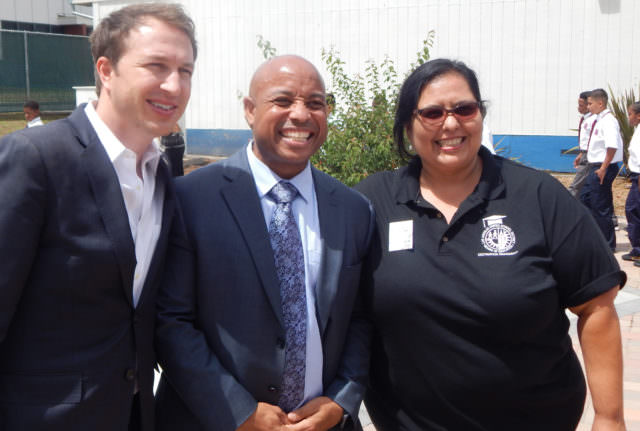 An all-girls district school and an all-girls charter school opened last year, and the boys school received $700,000 to revamp this part of the campus to add an outdoor stage and meeting area and as well as a music room with drums and guitars. The boys are mostly African-American, but there was a sprinkling of other ethnicities in the new school.

“We will continue to go out and meet with the community and promote the school,” Moorer said. “We do need to have a marketing campaign to show what we do.”

The special guests and media were shown the school’s daily Town Hall where they water a lemon tree with “libations,” well-wishes for themselves and the community. Then they read the William Ernest Henley poem “Invictus.” The lemon tree will be planted in the center of campus and grow and provide fruit for the campus to eat and make lemonade as they all grow older, Moorer said.

James Clow, 12, watered the lemon tree and said, “My libation is thanking all of you for coming out here to see us and our school, and I hope you tell everyone about us.”

After chatting with some of the boys, board member Nick Melvoin told them, “I’m inspired by being around such strong young men, and you are also a school full of feminists, and that makes you even stronger.”

Sen. Bradford talked about growing up down the street in Gardena in 1973 and how he almost came to the campus for high school (he went to Gardena High School). He said, “I commend the LA Unified School Board for creating this opportunity and being this innovative in education.”

McKenna was particularly emotional watching the ceremony. He went to an all-boys segregated high school in the South and was delighted to see that an all-boys school can work in Los Angeles.

“We still have work to do to get the word out to the neighborhood,” McKenna said. “It takes talking to parents at sororities and fraternities and barber shops in the community. But I am thrilled to see this come to fruition.”

Under his breath as he listened, Sen. Bradford quipped, “After Donald Trump, anything is possible.”