To build emotional intelligence in students, start with the adults. SEL pioneer Marc Brackett helps schools do both in ‘Permission to Feel’

Marc Brackett, author of Permission to Feel, works with students who are in the RULER social-emotional learning program. (Credit: Yale Center for Emotional Intelligence)

In a sense, Brackett has spent the past 25 years unraveling those moments in the classroom through his work studying social-emotional learning. Now the founding director of the Yale Center for Emotional Intelligence, Brackett runs a social-emotional training program, RULER, that has taught educators and students in more than 2,000 schools what it means to understand and manage their emotions. RULER is now being used by the largest school district in the country, New York City, with its 1.1 million students, and Brackett is helping lead Connecticut’s effort to have the first emotionally intelligent statewide education system.

In his new book Permission to Feel, published in September, Brackett shares what this quarter-century of work has taught him about the importance of emotional intelligence in his own life, in schools and in the workplace. His push for schools to create “emotion scientists” — or people who are able to ask good questions to understand emotions — comes at a time when schools around the country are placing an increased emphasis on social-emotional learning. Philanthropic organizations are investing millions in support of whole-child development, and recent research shows that these skills can improve academics, graduation rates, and student health and well-being.

“Emotions matter. You just have to have that lens that how kids and adults feel in our schools is critically important to their success,” Brackett said. “If we strictly focus on how they think and what they can do cognitively, we’re missing a tremendous amount of information.”

Fear and humiliation made it impossible for Brackett to concentrate on math when he was bullied in middle school, and he was far from the only student that has been distracted by their emotions. “The three most important aspects of learning — attention, focus, and memory — are all controlled by our emotions, not by cognition,” Brackett writes in Permission to Feel.

Brackett was attracted to, and learned with, some of the pioneering leaders of emotional intelligence: Peter Salovey, the current president of Yale, and John D. Mayer, professor of psychology at the University of New Hampshire. But his first teacher in the subject was much closer to home: his uncle, Marvin Maurer.

Growing up in New Jersey, Brackett struggled with understanding and expressing his emotions. He suffered from bulimia, felt socially isolated and was sexually abused as a child by a neighbor and friend of the family. After Brackett reported this, he said, other adults told their children to stay away from him and the bullying intensified. He would lock himself alone in his room or yell at his parents, who, unsure of how to respond to his outbursts, would yell right back. Though his parents eventually sought therapy for him, for the most part, Brackett said, the adults in his life didn’t know how to help him. Until his uncle came for a visit.

Maurer, who is now deceased, was a social studies teacher in New York who was disappointed with the little investment his students had in learning. So, in the 1960s and ’70s, he decided to make the lessons more relevant by connecting them with feelings: for every great historic battle, he found a reason to delve into the emotions of the people hundreds of years ago, and his students began listening more closely.

Brackett describes his uncle as being similar to the passionate and emotionally attuned Robin Williams character in Dead Poets Society. He noticed that Brackett was not doing well and would ask him to talk about his feelings. He even had Brackett help him type up lesson plans that would incorporate emotions like “isolation” or “alienation” in an attempt to help Brackett understand what he was feeling too.

School became more bearable for Brackett in high school. He went on to study psychology as an undergrad at Rutgers University. He remembers seeing Daniel Goleman’s famous 1995 book, Emotional Intelligence, and calling up his uncle to ask if he still had his emotions-embedded social studies curriculum. As Brackett started studying at the University of New Hampshire and then Yale, he and his uncle began sharing this curriculum with other schools. But they ultimately failed because educators expressed little interest in discussing feelings with their students.

That’s when Brackett learned one of the key tenets of what would soon be the RULER program, something he had learned years earlier as a middle school student wondering why his classroom teacher wasn’t helping him: If the adults in a school building don’t understand how to talk about their emotions, social-emotional learning will never work. 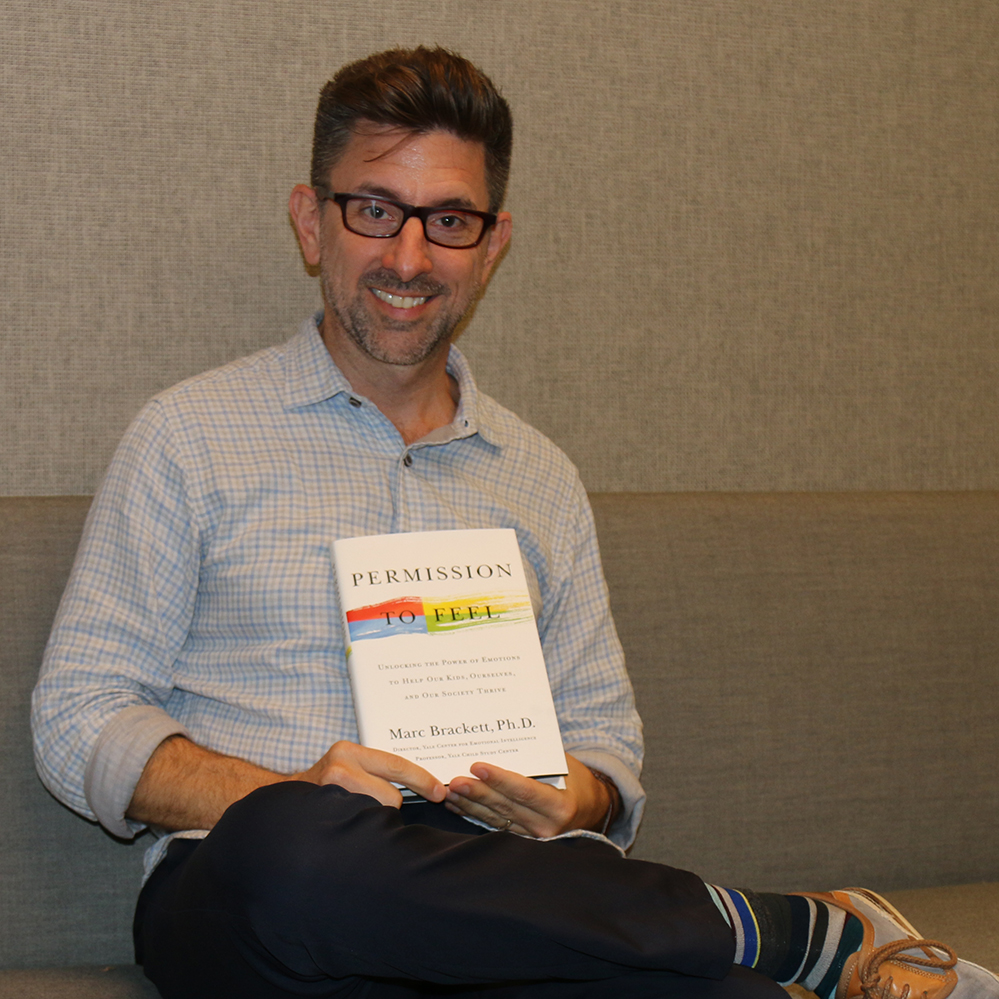 “When we [train adults] first, we have so much less resistance for the deeper classroom work,” Brackett said. “That has become our model, which is adult development before child development. It’s a unique model, such that we’re asking people in their first year to take a step back from learning something to do with kids and learn something about themselves.”

The emotional vs. the social in learning

RULER is an acronym that stands for five emotional intelligence skills: recognizing, understanding, labeling, expressing and regulating. Simply giving students and educators the vocabulary to name what they’re experiencing and the tools to understand and manage those feelings can lead to better-functioning classrooms and people, Brackett said.

The model uses a “train the trainer” approach, so every year schools select teams to attend sessions on RULER. Those teams then go back and teach other educators at their school. Last year, Brackett said, they were able to train educators from 500 schools. These teams also receive remote training sessions throughout the year and access to RULER’s online platform of resources such as sample student lessons or staff development.

While many social-emotional learning programs exist, the majority focus on the “social” side rather than the “emotional” one, said Sara Rimm-Kaufman, a professor at the University of Virginia who studies SEL programs. But RULER, she said, is one of the exceptions, with a strong focus on emotions.

“Schools tend to shy away from thinking about the intrapersonal: what is happening inside of an individual. Sometimes it feels like that’s not the domain of a school, to really be understanding kids’ emotional lives. And that’s, I think, why Marc named his book Permission to Feel, because it kind of opened up the idea.”

Rimm-Kaufman, along with her colleague Jason Downer, are in the midst of conducting the largest randomized controlled trial of RULER to date, with plans to recruit 60 schools in the mid-Atlantic area to study the impact on teachers and students. The randomized controlled trial — considered the gold standard in research — will take an objective look at teacher wellness, students’ social, emotional and academic skills, and how the effects compare across different socioeconomic backgrounds.

Research conducted by other academics, including Brackett, has found that RULER improves classroom climate, academics and social-emotional competencies for teachers.

Fran Rabinowitz, the executive director of the Connecticut Association of Public School Superintendents, said that when she worked in the Hamden and Bridgeport districts implementing RULER, she witnessed academics improve, discipline referrals decrease and school leaders change their minds about the importance of addressing emotions in schools. However, the work is a big time commitment, Rabinowitz said, and she had to seek philanthropic dollars to fund the work when her districts wouldn’t.

“It is not something you can take lightly; it’s a heavy lift in the beginning,” Rabinowitz said. “But what I liked about the RULER program was the sustainability.”

Bellevue School District in Washington state has been using RULER since 2013 for grades 3-5 (it also uses several other social-emotional learning programs for other grades). Randi Peterson, who is the district’s social-emotional learning curriculum developer for elementary grades, said that after using RULER for six years, educators and students started talking about emotions in the classroom whereas they might not have before.

“RULER really normalizes talking about emotions,” Peterson said. “The big game-changer [was that] people started talking about, ‘How are you feeling?’ which normally, you don’t always talk about.”

Teachers in the elementary grades started tying it into the curriculum too. As they’d read picture books with their students, they’d ask how the characters might be feeling and why. The idea for making a classroom charter — a description of how students and teachers want to feel during the day to hold one another accountable — has spread around the district, with counseling teams, the local Boys & Girls Clubs and the school board creating their own charters.

The ongoing challenge for the district is maintaining the momentum, Peterson said. Bellevue sent another team of educators last year to attend another RULER training in Salem, Oregon, to cultivate passionate staff who can champion the work.

“We need to have some of these conversations in the past that maybe we haven’t had,” Peterson said. “As an educator, we learned how to read and how to do math but we weren’t explicitly taught how to talk about our feelings. So we need to be mindful now that we’re asking adults to talk about their feelings with kids, [that we’re] supporting adults in that process.”

Not everyone is a fan of delving into these places at school. Brackett’s book is filled with examples of educators who expressed reluctance or even refusal to talk about emotions in the classroom. Some called it a waste of time. Others said academics, not feelings, were necessary for learning.

Social-emotional learning skills also face a communication strategy problem, according to Brackett. They are often referred to as “soft skills” or “nonacademic skills,” words that belittle their importance, he said.

Frederick M. Hess, resident scholar and director of education policy studies at the American Enterprise Institute, worries that schools will get pulled in by vendors selling social-emotional learning products that lack rigor and evidence and that teachers will get little support for this time-intensive work.

“It’s much easier to produce schlock than quality instructional programming,” Hess said. “Folks who are serious about SEL need to be very conscious about not letting the pendulum swing away from content and rigorous expectations.”

Brackett expressed similar concerns when asked whether he was worried that people would implement social-emotional learning poorly.

For example, some schools may implement SEL and give teachers little to no training. Others may purchase kits and only use them briefly but never meaningfully incorporate them into lessons.

The cost for a school to send three of its staff to a RULER training is $6,000, and an additional $1,500 for another person to attend. These costs cover the training, coaching throughout the year, virtual courses for other school employees and RULER’s online resources such as lesson plans.

Even with the risks, the value of social-emotional learning is being recognized outside of schools. Brackett works with businesses to help them teach their leadership and staff these skills so employers can understand why their employees might be anxious or what can happen when a co-worker’s negative mood disrupts a meeting. He’s also consulted with tech giants like Microsoft, Google and Facebook on emotional intelligence.

Disclosure: The Chan Zuckerberg Initiative provides financial support to RULER, the American Enterprise Institute and The 74.