Virtual pre-K filled a void for ‘overwhelmed’ parents last year, but experts disagree about its role — and federal funding — in a post-pandemic world

As in most pre-K classrooms, Geneva Gadsden’s students — known as the All Stars — rotate through different stations, from dress-up corners to building block areas.

But the All Stars, the Happy Owls and other groups of preschoolers at the Whitted School in Durham, North Carolina, also take turns with Chromebooks, spending 15 minutes a day clicking through early literacy activities from Waterford.org, a nonprofit software provider.

When COVID-19 shut down schools, many pre-K programs across the country saw participation drop or sent home paper materials for at-home learning. Not so at Whitted, where students kept rolling along with the Waterford Reading Academy at home.

“It really was a lifesaver,” said Suzanne Cotterman, early education director for the Durham Public Schools. The district adopted the program three years ago as a pilot, but expanded access to all pre-K families when schools closed. Some families, Cotterman said, couldn’t participate in scheduled Zoom classes, but “the bonus with Waterford is that it allows you to do it any time.” 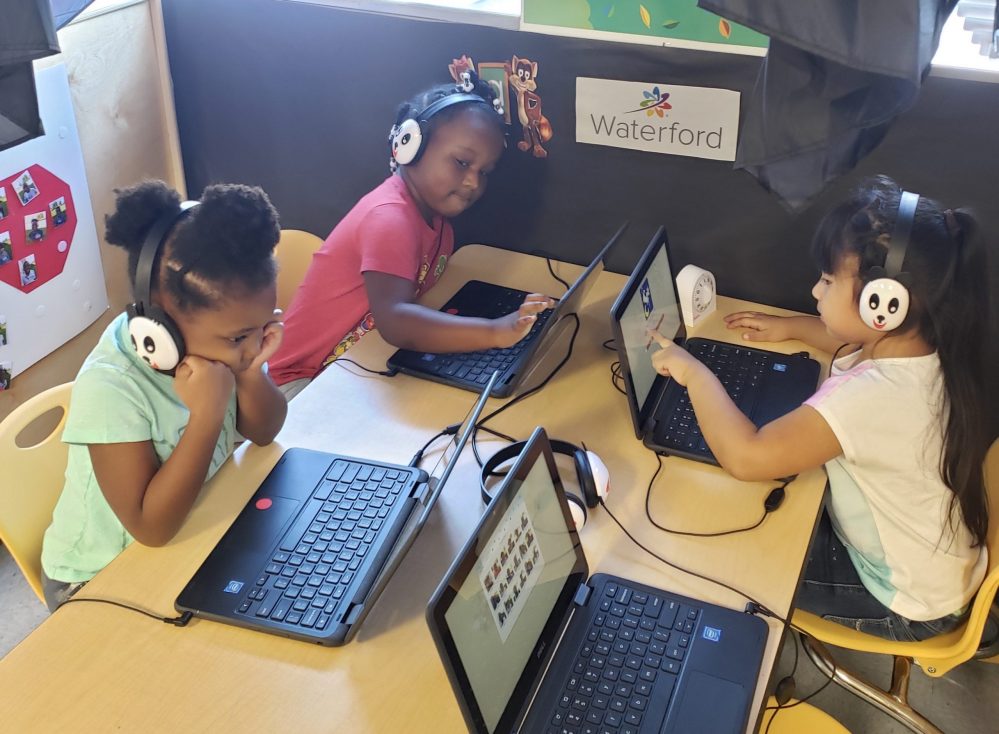 Preschoolers at the Whitted School in Durham, North Carolina use a Waterford program. (Durham Public Schools)

More than a year after COVID-19 forced preschool programs to shift online, Waterford hopes schools continue to employ virtual models like theirs to help young children prepare for kindergarten. Waterford designed its program to work in classrooms like Gadsden’s or to be used directly by families at home. Waterford Upstart, the organization’s signature early learning program, can reach children in rural areas and other communities that don’t have access to pre-K, said spokeswoman Kim Fischer. But many early education experts oppose spending public funds on computer-based models, saying they can’t match the experience children get in a high-quality classroom. And they interpret the huge enrollment declines in pre-K and kindergarten this year as evidence that most parents agree.

“It’s important to understand the limits of digital technology in early education,” said Aaron Loewenberg, an education policy analyst at New America, a center-left think tank. “So much of pre-K is about the social-emotional learning that happens via student interaction with peers and well-trained educators, and that sort of learning can’t be replicated by interacting with a computer program.”

While there are other widely used online early learning resources that parents can purchase or find for free, including ABCmouse and Khan Academy Kids, Waterford has been especially successful at garnering public funds for preschoolers’ at-home learning.

In 2014, the nonprofit received a $14.2 million federal grant to start pilot programs in five more states. And they view President Joe Biden’s $200 billion universal pre-K proposal as an opportunity for further expansion.

It’s been a relatively quick ascend for Upstart — an acronym, now discarded, for “Utah Preparing Students Today for a Rewarding Tomorrow” — which received its first grants from the state in 2009 to reach families in rural areas. A 2018 study from the Utah Department of Education showed 77 percent of Upstart children had average or above average literacy scores at the end of the program, compared with 71 percent of children in high-quality public preschools and 69 percent in private programs. In math, Upstart children demonstrated no advantage.

‘Children that you know are behind’

Public funds support Upstart in five states, with most targeting the program to low-income children. Wisconsin made the program available in districts with significant achievement gaps. South Carolina spends about $3 million to serve 1,400 4-year-olds in 17 high-poverty districts. As in Durham, children complete activities with parents at home in addition to attending state-funded pre-K.

She added if additional funds were available, she would consider expanding the program to children not enrolled in a center. “It’s additional instruction for children that you know are behind,” Moore said.

That’s precisely what worries early-childhood education advocates — that policymakers might see Upstart as a way to do pre-K on the cheap. The program costs about $2,000 per child, well under the average $5,500 per child states spend on pre-K.

“Our biggest concern is that using public [money] will interfere with efforts to provide real publicly funded preschool to children,” said Josh Golin, executive director of Fairplay, formerly the Campaign for a Commercial-Free Childhood. In a 2018 statement, the organization and another nonprofit, Defending the Early Years, raised concerns about Upstart, calling it part of a “larger set of trends to further digitize and privatize public services.”

Rhian Evans Allvin, CEO of the National Association for the Education of Young Children, expressed similar sentiments in 2020, and said in a recent email that regardless of the pandemic, her views haven’t changed.

But Fischer, with Waterford, described Upstart as a catalyst that has convinced Utah lawmakers of the importance of early learning. Until 2019, the state didn’t even have a public pre-K program, according to the National Institute for Early Education Research’s annual “yearbook.” But in the 2019-20 school year, the state spent almost $7 million on two grant programs supporting preschool centers.

“We do not see ourselves as competition to any other form of early learning,” said Fischer. “We try to fill the gaps wherever there are.”

In New Hampshire, young English learners often fall into those gaps. Data shows that if young children are not proficient in English by kindergarten, they can trail their peers in academic outcomes throughout elementary and middle school. That’s the population the state education department was hoping to reach when it awarded a $440,000 grant to the Greater Nashua Smart Start Coalition, an early learning initiative within the local United Way, to offer Upstart. The program was funded with a federal Preschool Development Grant aimed at better preparing children in low-income families for kindergarten.

Five-year-old Alice Wang, whose home language is Mandarin, would have attended the local Nashua school district’s pre-K if it hadn’t been for the pandemic.

“Waterford Upstart kind of became her school,” said Zixin Lou, her mother, who doesn’t think Alice is any less prepared for kindergarten this fall. “She told me, “I know how to spell ‘mom.’ I know how to spell ‘water,’ and ‘Mom, do you know chickens hatch from eggs?’” 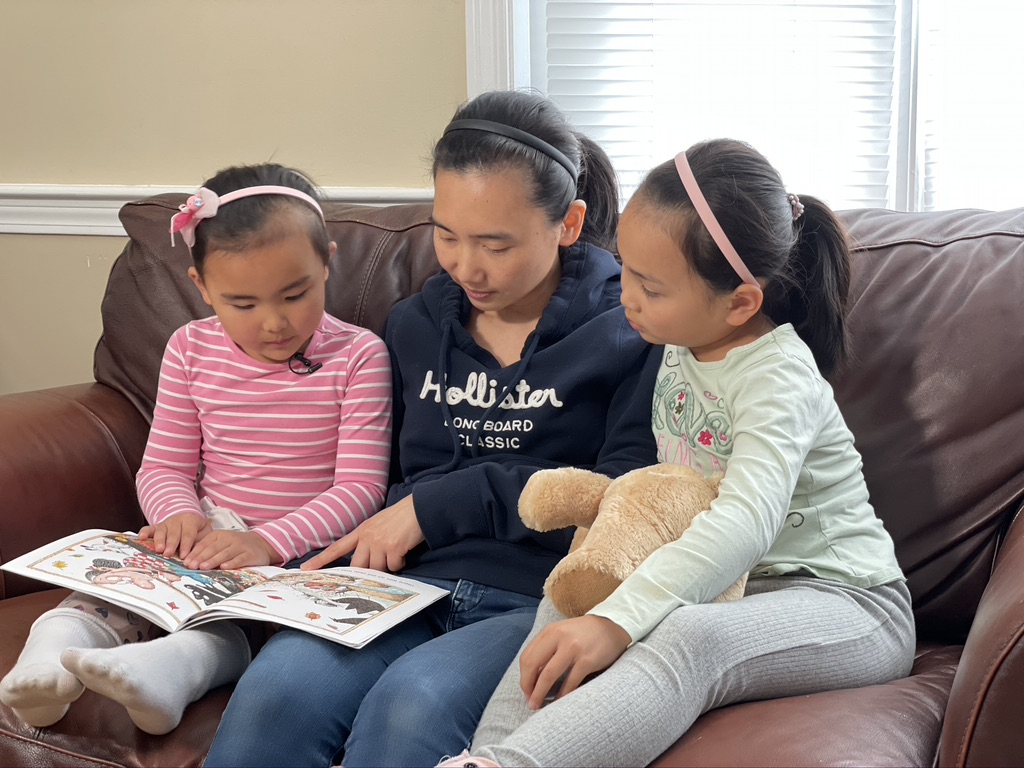 Between the beginning of the pandemic and April of this year, the number of Upstart users quadrupled, from 20,719 to over 82,600, according to Waterford data. And now, with Biden pledging to offer universal pre-K, the organization sees the potential for Upstart to help meet demand.

“We have to focus on how we can achieve universal kindergarten readiness as quickly as possible,” Fischer said, adding that it “could take decades” to add enough classrooms to serve all 3- and 4-year-olds. Existing state-funded pre-K programs serve just over a third of the nation’s 4-year-olds and about 6 percent of the 3-year-olds, according to the National Institute for Early Education Research. “To be truly universal, the country has to meet children where they are. There are always going to be kids who don’t have access.”

The question is whether an online program is a sufficient replacement for in-person pre-K. At the start of the pandemic, preschool participation fell by half, and those children who stayed in remote programs didn’t participate consistently, according to the institute’s surveys of families.

“Parents have been frustrated and dissatisfied with remote pre-K this last year, and I think they will make that clear,” said Steve Barnett, the institute’s senior director.

Much of the skepticism relates to screen time. Experts find that young children just don’t learn as well from screens as they do in a face-to-face setting, and too much screen time can interfere with development, research has shown. The American Academy of Pediatrics recommends no more than an hour of screen time for 2- to 5-year-olds, but one study from Ohio showed that during the pandemic, kindergartners’ daily average time online had reached more than six hours.

The AppleTree Institute for Education Innovation, a nonprofit that works with charter schools to implement their preschool model, ran into these concerns when it joined with Noggin, Nick Jr.’s educational streaming service, and Sparkler, an early learning app, to offer free, online content — called Ready Grow — for children in 100 classrooms. Families in the program also received iPads.

In focus groups, parents said the digital materials filled a void when they were “feeling overwhelmed and not knowing what to do,” said Chavaughn Brown, who leads Appletree’s research efforts. Some teachers worked hard to incorporate characters from Nick Jr. programs like “Blue’s Clues” and “Paw Patrol” into their lessons so children would see the connection to Ready Grow. But some parents didn’t want their children to have any more screen time beyond virtual Zoom classes.

Even so, Appletree will continue to offer a remote option for families this fall. Brown said while she sees ed tech as a supplement to high-quality preschool, there are ways “you can leverage children’s love for those characters to deepen their learning in other ways.” 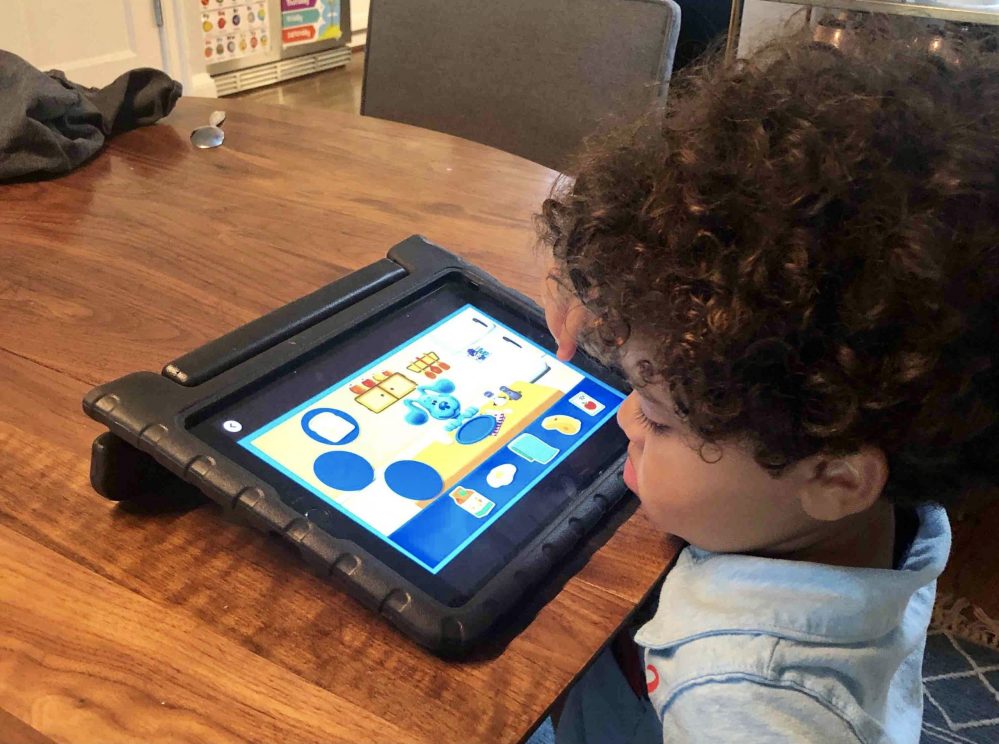 Fischer, with Waterford, said there’s a false assumption that children using Upstart are spending hours in front of screens. The literacy component takes just 15 minutes, she said. Adding math and science would stretch the time to half an hour, and family liaisons are trained to intervene if they think children are spending too much time on the program.

As use of Upstart grows in other states, Waterford’s largest footprint remains in Utah. State funding for the program continues to grow, with the organization slated to receive over $24 million in 2022. Upstart is available to any preschooler in Utah.

The Granite School District in Salt Lake City, for example, is focused on its own, in-person preschool classes for 3- and 4-year-olds. Spokesman Benjamin Horsley said leaders haven’t worked directly with Waterford to recruit preschoolers for Upstart.

“We do feel like there is some value in utilizing digital programming,” he said. “The concern has always been, will parents think that an online program is sufficient over in-person instruction.”