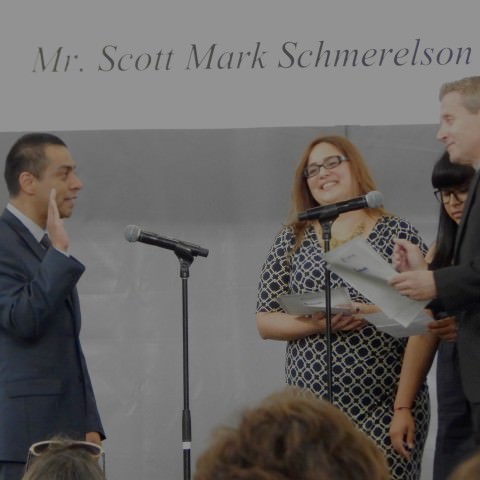 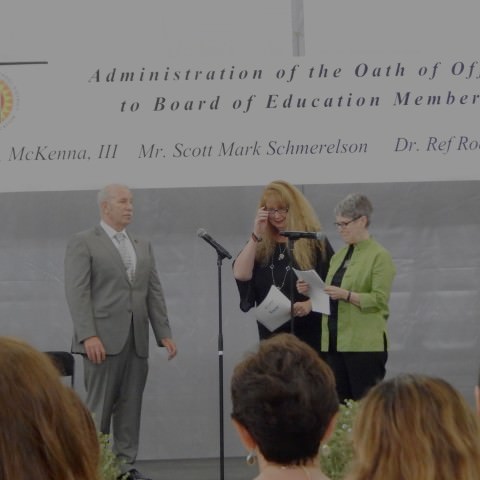 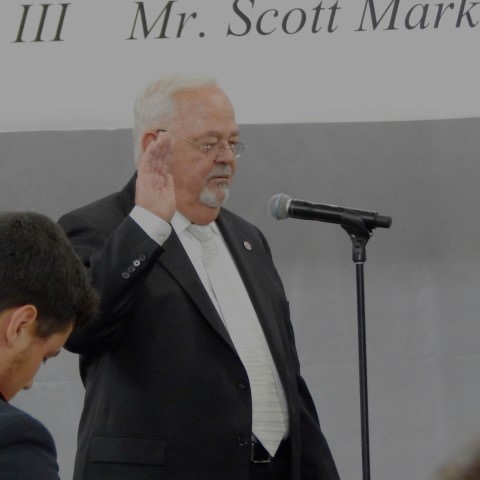 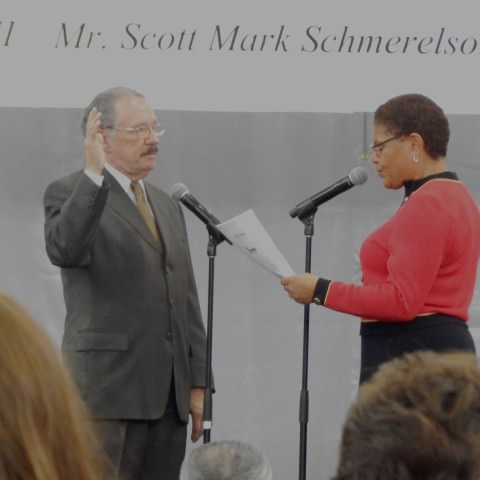 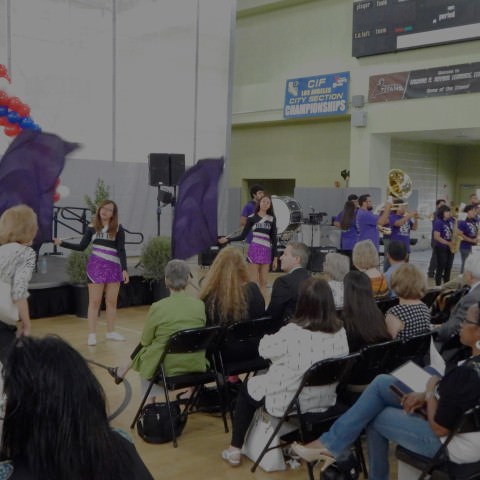 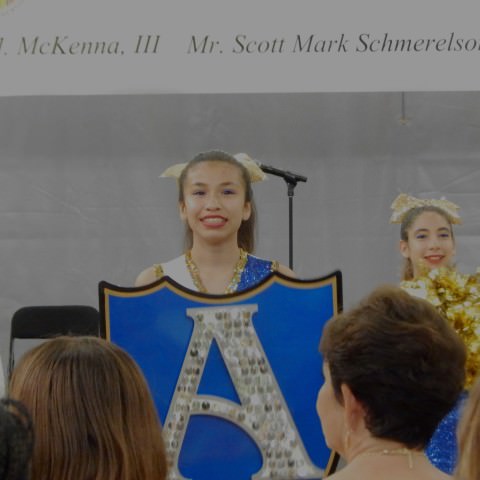 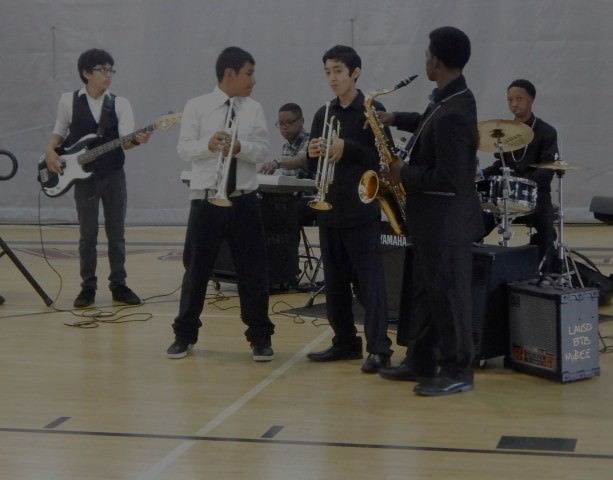 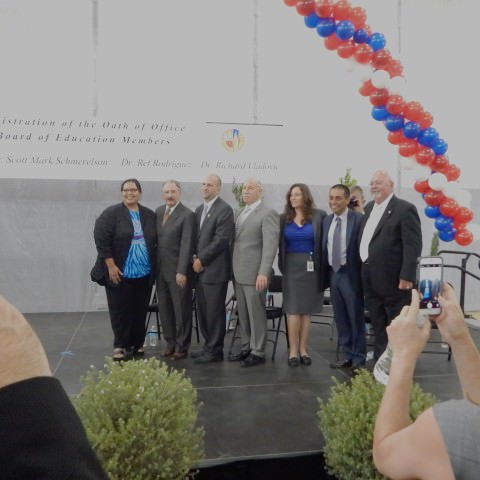 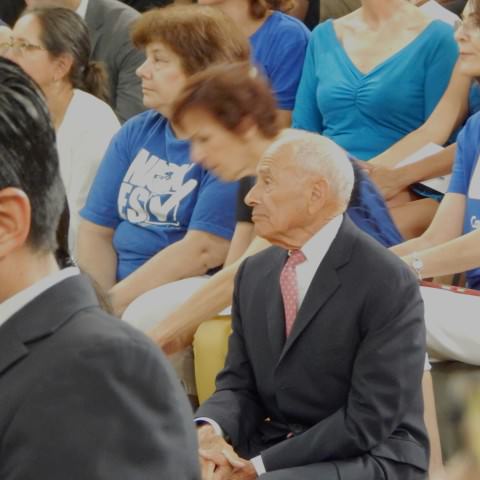 Two new LA Unified board members and two former board members took their oath of office today during a ceremony in which they vowed to bring unity and collaboration to the district and with each other.

For each member, it was the start of a five-and-a-half year term, following a change in the city’s voting schedule to get more people to the polls.

The other three board members _ new president Steve Zimmer, Mónica Ratliff and Mónica García — watched from the stage, along with lame-duck Superintendent Ramon Cortines, as newly-elected Ref Rodriguez and Scott Schmerelson, along with Richard Vladovic and George McKenna were given the oath of office.

In brief remarks after the oath, each member spoke with passion about  hoped-for unity on the new board and their dedication to serving. They also had kind words for Cortines.

Rodriguez, a charter school executive who won a contentious election campaign against Bennett Kayser, angering other board members, said he wanted to talk about the “U” in LAUSD.

“Unified means that we all are welcome, there’s a place for you in our district,” said Rodriguez, who also gave part of his speech in Spanish. “I want to make sure that we put love at the center of everything we do in this district.”

Rodriguez named each fellow board member by name and said, “I know that we will be unified in our quest to make Los Angeles excellent.” He even had a bro-hug for Zimmer, who had criticized him for the ugliness of his campaign.

McKenna, who ran unopposed after serving out the term of the late Marguerite LaMotte, said, “We must work together, but we don’t always have to agree.”

McKenna pointed out: “Our most important constituents didn’t vote for me because they aren’t old enough to vote, and they don’t know our names.”

He said, “If anyone knows anything more precious than children, you tell me.”

Schmerelson, who described himself as “a plain old guy from the school,” was sworn in by representatives of the two unions who supported him in his victory over Tamar Galatzan: Colleen Schwab, a vice president of the teachers union, UTLA; and Judy Perez, the newly-retired president of the principals union, Associated Administrators of Los Angeles.

“I am the right person for the job,” he said. He pointed to all the union support he received in his election and said that “unions can united to work together.” Unlike Galatzan, who also worked in the city attorney’s office, Schmerelson said, “I will be a full-time board member.”

Schmerelson also promised a “bully-free” environment and promised that “parents get the attention and respect they deserve.”

Vladovic, the out-going board president who defeated Lydia Gutierrez in his bid for a third term, was given the oath by his son-in-law, Merrill T. Sparago. In his brief remarks, Vladovic conceded, “We have our problems as any family, but LA as a district works.”

He also praised Cortines, recalling a 6 a.m. telephone call from Cortines years ago when Cortines served in an earlier term as superintendent and Vladovic was an area supervisor.

“He pushes us hard, and that’s good,” Vladovic said. “There is not a person here who I question their motives. They all care about our children.”

The ceremony was held at the Edward R. Roybal Learning Center and was followed by a meeting at LA Unified headquarters, where Zimmer was voted in unanimously as board president.

With the addition of Schmerelson and Rodriguez, LA Unified now has a school board that has no member with a child in an LA Unified school.