‘Welcome to the Red Summer of 2021’: Minnesota social studies teacher of the year shares lesson on Daunte Wright’s killing & the deadly events of summer 1919

Long before sunrise the morning after Daunte Wright, a Black motorist, was killed by a white police officer outside Minneapolis, Kara Cisco made some quick posts to Facebook. She asked if anyone knew whether the previous night’s protests would affect her commute to work. She would need to traverse the part of Minneapolis where the uprisings that followed last summer’s killing of George Floyd began. The air in the city, she noted, “has been hanging heavy for days” as the trial of Derek Chauvin, the police officer charged in Floyd’s death, entered its third week.

Minnesota’s 2020 Social Studies Teacher of the Year, Cisco teaches ninth-grade civics at St. Louis Park High School, located just west of Minneapolis and not far from Brooklyn Center, where Wright was killed during a traffic stop. 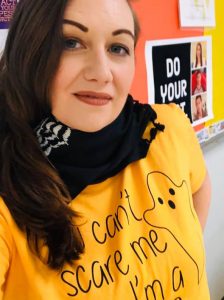 Her next Facebook post was a lesson plan for the day, titled “Justice for Daunte Wright and the Red Summer of 1919,” and an open invitation for others to use it.

A slide describing the possible trauma of watching events unfold is followed by a brief, factual description of Wright’s shooting Sunday afternoon and then a lesson about “another time period in U.S. history immediately following a pandemic in which racial tensions had come to a boiling point, tempers were high, people were traumatized and the result was national unrest and a fight for racial justice.”

In the summer of 1919, the nation was coming out of the Spanish flu pandemic and a world war, and the Great Migration of Blacks from the South was underway. In a slide deck that makes up the lesson, Cisco outlines 30 race riots that took place around the country that year, the Black Wall Street massacre two years later in Tulsa and an overview of redlining — the practice of legally barring people of color from living in a neighborhood — in Minneapolis.

“This is what happens to a nation battered down by pandemic, loss and racial trauma that is suspended in an air so thick you could cut with a knife,” she wrote on Facebook. “Welcome to the Red Summer of 2021.”

The lesson plan, which asks students to apply their own critical lenses to the previous day’s deadly events, illustrates a point Cisco made in an interview with The 74 in the wake of the U.S. Capitol riot in January: while it is inappropriate for civics teachers to be partisan, it is important that they teach from a position “rooted in criticality.”

“To put that in layman’s terms, the questions that we pose as teachers are powerful in that they invite students to develop their own critical consciousness and their critical thinking skills in unique ways,” she said. “Our power lies not in telling, but in asking big questions, and inviting students to engage.”

The full lesson can be found here.