Who Will Be the Next School Board President? 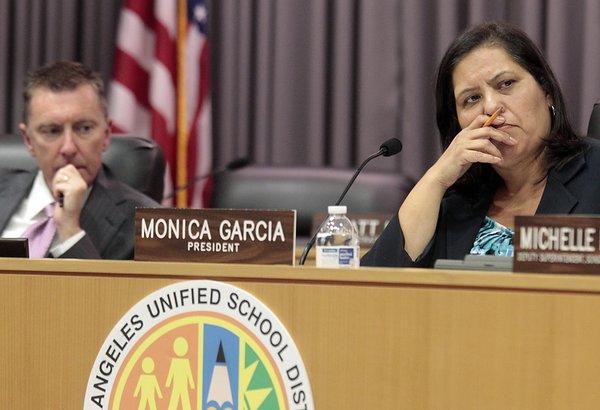 LAUSD watchers began speculating about who the next School Board President might be almost as soon as the results of the March 5th LAUSD primary election were known.

The issue gained further immediacy when the School Board voted 4-3 this Tuesday to limit the term of President to two years. Unless the Board votes to waive the new rule, which it can do at any time, LAUSD will have a new President in July.

The two main contenders appear to be Dr. Richard Vladovic, who came within a single vote of becoming Board President last year, and newly re-elected Board member Steve Zimmer, who voted to keep president Monica Garcia last year but  voted for term limits earlier this week.

Superintendent John Deasy appears not to be the least bit concerned who might be named the next President. But none of the likely contenders will be as staunch a supporter as Garcia was.  A Zimmer or Vladovic Presidency might mean a slower-moving agenda, and Deasy is a notoriously impatient man.

Vladovic, a former superintendent of West Covina School District, is perhaps the leading contender to replace Garcia.  He got three votes (himself, Marguerite LaMotte and Bennett Kayser) last July, when Garcia was narrowly reelected. Like Zimmer, Vladovic is an independent thinker. He’s also highly unpredictable and hardly ever speaks to the press. He did not respond to our request for comment.

Would Zimmer vote for Vladovic? “There is a long time between March 20th and July 2nd,” Zimmer responded in an email. “The important questions driving us forward should inform leadership decisions more than the politics of the moment.”
Another possibility is Zimmer himself would become Board president. Unlike Vladovic, there’s nothing to suggest he wants to job, other than the fact that he’s always tried to be a “bridge-builder.”

“Zimmer’s a guy that genuinely wants to do well, he genuinely wants to adhere to the principals of sound governance,” said one Board observer. “To the extent that more process, more inquiry would somehow create more time to get a consensus, I could see him internally rationalizing it that way.”

But it’s unclear if Vladovic would vote for Zimmer.

Whether or not they become President, Vladovic and Zimmer will likely be key swing votes.  With Board Members Kayser and LaMotte voting together, and Garcia and Tamar Galatazan voting together, any Board President would almost certainly need the vote of either Zimmer or Vladovic (or both).

In July, there will be a new District 6 Board member — either Antonio Sanchez or Monica Ratliff.  One of his or her first actions will be to elect a new President.

If Sanchez wins the District 6 runoff, there’s an outside possibility that he — lacking ZImmer’s baggage and coming on the to Board with endorsements from both UTLA and the Coalition for School Reform — could jump right into the Presidency.

The School Board President doesn’t control what items get placed on the agenda, but he or she does control the speed with which the agenda flows.

While it may be hard to believe for anyone who’s sat through a 7-hour board meeting recently, most people credit Garcia for doing an excellent job of keeping things moving.

If, for example, the new Board President were a UTLA-friendly candidate who disagreed with or just wanted to make life difficult for Superintendent John Deasy, he or she could gum up the agenda and slow Deasy’s “reform” agenda to crawl.

“If UTLA feels they have a good number of people on the Board, they will introduce new processes into everything,” said the Board observer. “New sub-committees, a ton of procedural items — under the guise of more transparency — and slow everything to a grinding halt.”

Previous posts: After Election, Board Status Quo Remains Intact, Deasy in Danger? It Might Depend on Vladovic